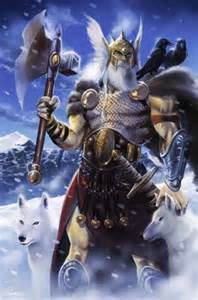 Little is known about Odin's life before the Masters of Evil's attack on Asgard. It can be assumed to be similar to his mainstream counterpart.

Odin's powers were stolen by Doctor Doom during the Masters of Evil incident. He was imprisoned in Doom's laboratory before being freed by Thor, Captain America, Spider-Man, and Wolverine. Once Doom was defeated, Odin claimed his soul and sent him to an eternal fate of suffering.

Once every year, Odin was forced to under take the Odinsleep; a state of deep sleep where he recharged the Odinforce but left him as vulnerable as a mortal. The duration of the Odinsleep varied from time to time; sometimes it was a single night while other occasions were for more than a week.

Equipment: Odin normally wore Asgardian battle armor. He also at times wore a blue cloak with a wide brimmed hat covering his missing left eye, at which times it was said he went by the name Grimner.

Retrieved from "https://marvelcomicsfanon.fandom.com/wiki/Odin_Borson_(Earth-6109.2)?oldid=199876"
Community content is available under CC-BY-SA unless otherwise noted.