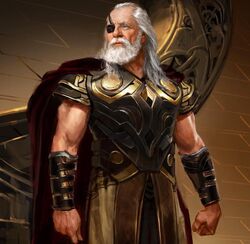 The Kingdom of the Nine Realms (Formerly), Renegades (Formerly)
Universe

Kneel. Before your King.

Odin Borson conquered all of the Nine Realms at a young age, making them all bend to their knees and worship him as a God. Paranoid and distrusting, Odin opted never to have children, believing that they may be the only ones powerful enough to overthrow him.

Odin would eventually be recruited into the Renegades by his enemy, The Outsider, both because he wanted to torture Odin, but he also wanted someone to get things done. Angry and spiteful, Odin disobeyed his orders and took control of the Renegades, obliterating Namor and recruiting his own teammates that would obey him, Ravager, Doctor Doom, Storm, and Captain America. Odin attempted to use his team to kill the Outsider and conquer the multiverse, but he was opposed by the Outsiders, who eventually recruited the help of an alternate version of Thor, who battled Odin to a standstill in his own kingdom, eventually falling to the might of Thor, who impaled him with the weapon Stormbreaker.

Retrieved from "https://marvelcomicsfanon.fandom.com/wiki/Odin_Borson_(Earth-500000)?oldid=244580"
Community content is available under CC-BY-SA unless otherwise noted.