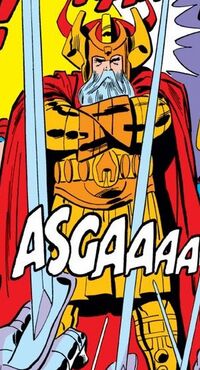 What did I do to deserve you two as sons?

During a war against the Frost Giants, Odin faced off in a one-on-one battle with King Laufey and won. The two realms agreed to a truce, but Odin confiscated the Casket of Ancient Winters and rescued the fallen king's abandoned son, Loki, as his own.

Centuries later, Laufey sent several of his soldiers to steal back the Casket. Odin's true son, Thor, led an unauthorized attack on Jotunheim and Odin banished him to Midgard. After Loki learned of his heritage, Loki allied with his birth father to overthrow Odin during his annual Odinsleep. Luckily, Thor returned to Asgard and defended his father.

Retrieved from "https://marvelcomicsfanon.fandom.com/wiki/Odin_Borson_(Earth-2228)?oldid=192045"
Community content is available under CC-BY-SA unless otherwise noted.