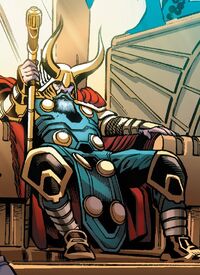 After the birth of his son and discovering that the Frost Giants had taken over Earth and caused a glacial period over Earth. The newly appointed King Odin rallied his soldiers and headed to Earth to battle them.

Odin and the Asgardians defeated the Frost Giants and sent them back to Jotunheim, from the wreckage of the battle, Odin found an orphaned infant Frost Giant and took him back to Asgard and named him Loki. The Asgardians used their magic to erase the memory of Frost Giants from the humans memory and returned to Asgard.

When Thor had reached adulthood, Odin gifted Thor with Mjolnir, a weapon forged from a dying star by Dwarves.

When Loki learned of his heritage and learned he was in fact a Frost Giant rather than an Asgardian, Loki attempted to kill Odin although Thor stopped him. For this treachery, Loki was banished by Odin. Eons later, in 1945, while Odin was in the Odinsleep, Loki lead an attack on Asgard with a coalition army of Frost Giants and Nazi soldiers against Asgard, Thor and a young Asgardian warrior by the name of Lady Sif helped him in stopping this attack, although many Asgardians died because of this. Grown tiresome of war and death, Thor decided to leave Asgard and head to Midgard.

Odin possessed all the conventional attributes of an Asgardian God. However, as the King of the Asgardians, many of these attributes were significantly superior than those possessed by the majority of his race.

God of Wisdom: Vast knowledge of ancient and arcane wisdom, considered to be his most powerful weapon.

Expert Combatant: Odin is a skilled hand to hand combatant.

Master Tactician: His thousands of years of experience resulted in him becoming a master tactician which could possibly win him many battles.

Asgardian Mystical Combatant: Odin was also extremely adept at wielding his vast energy powers during combat situations. Odin was extremely skilled at using Asgardian magic, surpassing even that of Karnilla or the Enchanters.

Allspeak: Thanks to the Allspeak Odin can communicate in all of the languages of the Nine Realms, Earth's dialects, and various alien languages.

At his peak, Odin possesses sufficient strength to lift up to 75 tons, however in his physical prime he could lift about 90 tons. He's also able to augment his strength to an excess of 100 tons by tapping into the Odinforce.

Once every year, Odin was forced to under take the Odinsleep; a state of deep sleep where he recharged the Odinforce but left him as vulnerable as a mortal. The duration of the Odinsleep varied from time to time; sometimes it was a single night while other occasions were for more than a week.

Equipment: Odin normally wore Asgardian battle armor. He also at times wore a blue cloak with a wide brimmed hat covering his missing left eye, at which times it was said he went by the name Grimner.