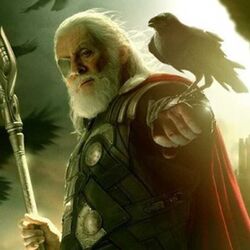 A wise King never seeks out war, but he must always be ready for it.

Odin rose to power after his brother, Cul, was banished to the Isle of Silence. He conquered the Nine Realms and formed them as his kingdom, and went on to marry Freyja Freyrsdottir. They had two children, Thor and Balder. Odin also went on to adopt the Frost Giant baby Loki, after vesting his father, Laufey, in war.

Odin eventually banished Thor to Midgard because of his arrogance, but was reluctant to let Loki ascend to the throne. Over the years, he came to respect Thor's ambition and love for Midgard. Eventually, he found himself more disappointed in Loki when he embraced his role as the God of Mischief and began to menace the Avengers.

Odin often rolled his eye as he watched Thor and Loki bicker, while Balder remained out of the way and more involved leading the Asgardian military. Eventually, Odin's brother, Cul, resurfaced and began amassing an army of Asgard's enemies.

Odin knew the ensuing war with Cul would end with Asgard cutting off communication with Midgard, as foretold in the Prophecy of Infinity. Unwilling to let himself be the cause of a bleak future for his son, Odin offered up his own life to his brother out of hopes it would calm his aggression. Odin was struck down, only for the war to rage on, leaving Thor to rise up and become the King.