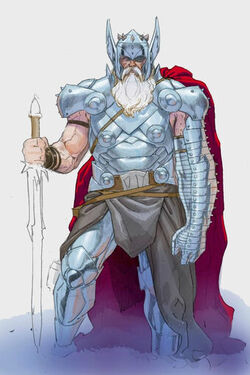 It is the duty of the Allfather to protect the Nine Realms, and to sire a worthy successor... I have failed in both respects.

Odin inherited the throne of Asgard following the death of his father, Bor. For centuries, Odin ruled the Nine Realms uninterrupted, quelling any rebellion that popped up from the more troublesome realms. He even erased all record of the Tenth Realm, Heven, following his treaty with the Queen of the Angels which resulted in him giving away his daughter, Aldrif.

At some point, Odin would come into contact with the Titan Eros, who sought the Infinity Stones in order to prevent his brother, Thanos, from collecting them. Having previously battled Thanos, Odin agreed to join Eros in his quest, confiding in him that the Asgardians already possessed the Space Stone in their trophy vault.

Over the years, the two of them recruited several other allies to their cause, including Agatha Harkness, whom Odin teamed up with to steal the Time Stone from the Masters of the Mystic Arts. After successfully liberating the Eye of Agamotto, Odin opted to leave the Space Stone, which was encased in the Tesseract, with Agatha, as he placed the Eye in his trophy vault in order to sew further confusion as to the location of each stone.

While his work with Infinity Watch was primarily behind the scenes, Odin dedicated the rest of his life to raising his sons, Thor and Loki.

As they reached maturity, it became clear that Thor did not want the throne, and Loki wanted it too much. Hoping to teach them a lesson in leadership, he banished them both to Midgard. This did not have the desired effect, as Thor went on to join the Avengers and Loki became one of their worst enemies.

Much to Odin's chagrin, Loki would even go on to ally himself with Thanos in an attempt to raid Asgard for the Space Stone, which they didn't know had been replaced. Odin and the Asgardians were able to fend off the attack, which led to Loki going into exile from both Asgard and the Black Order.

Odin became resigned to his role as King, and eventually came to the realization that he had no true heir, and thus began trying to open peace talks with Heven. However, he would not have much time to finalize these peace talks, as Thanos launched another assault on Asgard, this time already in possession of the Soul and Power Stones. He was, however, still under the impression that Odin possessed the Space Stone. Once Asgard began to fall to the might of the Black Order, Odin sent out a distress call through the Bifrost, but it reached the Avengers too late. Thanos had impaled Odin with the Twilight Sword and pillaged the trophy vault, discovering the Time Stone instead. As Odin laid dying, Thanos interrogated him as to where the Space Stone was, but Odin simply laughed and taunted Thanos with his dying breath.

Retrieved from "https://marvelcomicsfanon.fandom.com/wiki/Odin_Borson_(Dimension_0)?oldid=263195"
Community content is available under CC-BY-SA unless otherwise noted.