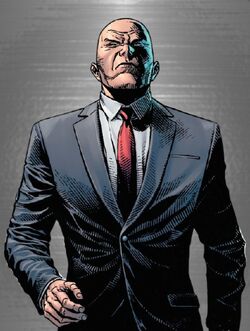 You know, Stark... It will give me much pleasure to checkmate such a resourceful opponent, especially to men like you...

Obadiah Stane was a ruthless individual who studied his adversaries to find weaknesses that he could exploit, even while he was still a child, having to be continuously abused and mocked by their drug-addicted parents since they never really expected them to conceive him, right until their untimely death at the cause of drug overdose. Stane then lived for the rest of his childhood and adolescence in a private orphanage until he was old enough to live on his own, where he had a more suitable environment compared to his old home located in the slums of Los Angeles, although this traumatic change in life has never made him stop taking advantage over others by manipulating them whenever he's in need, unknowingly similar to how his deceased father had once indirectly taught him in order to survive in the chaotic, and unfair society of this world.

Growing up into long-term success after finishing his education, which earned him several numerous PhDs, Stane then eventually becomes a wealthy businessman who headed Stark Industries after the unexpected death of Tony Stark's father and his old friend, Howard, and became the firm's second-in-command when the younger Stark came of age to become the new CEO of Stark International, which was more often known later on as Stark Industries.

The Birth of Iron Man

For several years, Stane is believed to be a good friend of Stark when Tony is missing for three months after he is captured in Afghanistan. Yet over time the true Stane is revealed when Tony returns and announces that Stark Industries will no longer manufacture weapons after he learns that terrorists uses his own design to kill the Americans that they were made to protect. When the board of directors begin to believe Tony is suffering from post-traumatic stress and want to remove him from his position as CEO, Stane advises him to stay out of the public eye.

Tony then suggested that Stark Industries begin working on harnessing the power within arc reactors instead of weapon manufacturing but Obadiah initially seems to be opposed to the idea, believing that the company itself should continue its ways of militarizing weapons and selling them to both military, and even to terrorist organizations. It is when Tony spontaneously decides to make a public appearance that he finds out Obadiah was the one making the discreet dealings with the terrorists. Obadiah then secretly traveled to Afghanistan discussing the giving of weapons with the military leader, Raza, who was the one that had captured Tony earlier. Stane then obtains the remains of Stark's Mark I armor from the Ten Rings who provided it as part of a peace offering, before neutralizing the entire terrorist group.

Afterwards, Stane secretly engineered his own armor with the arc reactor he stole from Stark powering it after his scientists were unable to replicate it. Stane then believed that Tony's recent actions, such as discontinuing the manufacturing of his weapons, were leading Stark Industries to ruin his father's own legacy, giving Stane all the more reason to eliminate Stark. With his criminal activities revealed, Stane dons the armor of the Iron Monger created under his secret Sector 16 Project, by his to attack Pepper Potts and several S.H.I.E.L.D. agents before he brutally fights Stark as the Iron Man and in the end, he was unexpectedly and permanently paralyzed when Stark has him extremely electrocuted by the overloaded reactor at Stark Industries, finally defeating the notorious villain at last.

By the last second, Stark was able to rescue Stane and revive him afterwards, before his suit fell into the reactor, leading to the reactor and the building's explosion. According to S.H.I.E.L.D. agent Phil Coulson, Stane's ultimate defeat was passed off to the public as having to be the only survivor in a private plane that unfortunately crashes while on vacation on his way to the Bahamas, albeit he became a paraplegic for the rest of his life, as a result.

However, Stane's true whereabouts were shown shortly after, where it was revealed that he truly was crippled since the incident, and was being treated by provided by some of S.H.I.E.L.D.'s care inside his mansion in Los Angeles, California, although he accepted a deal with S.H.I.E.L.D., to be currently on house arrest, as long as he would not have to deal with the higher authorities.

Out of pitiful sorrow, Stark even built him a new Stark Industries device that could help him walk again as a gift, but Stane had the mandatory need into using it most of the time, all just so he could walk, since he was permanently paralyzed without it. Along with his developing recovery, Stane also learned the of redeeming himself as a humble and patient man, since the incident had occurred on the Stark Industries building, seeking for a new, fresh start in life.

During the events of Ultimate War, Stane was forced to leave his town be after his neighborhood was entirely raided by the ruthless terrorist organization, Hydra. All of his elite S.H.I.E.L.D. bodyguards were unfortunately killed in the crossfire against Hydra's forces.

As a result, Stane and all of his numerous neighbors were forced and threatened into being compressed as a one group, where they were surrounded by the organization's appointed soldiers, who would unhesitatingly fire their weapons at command with intent to kill at whoever attempts to escape their clutches. On their way towards the destination of their newly-established "mega-prison," he and the other capture evacuees stopped near a gasoline station. Stane then stands up for the rest of the civilians against the operative forces, by questioning their cause.

However, as Stane insisted asking the operatives with an apoplectic tone on why they should follow their orders and whose orders they have to follow, Stane only received a bullet straight into his head by a high-ranking Hydra operative, instantly killing him without any hesitation whatsoever. After his sudden merciless death, the leader Hydra operative abusively taught the rest of the that Obadiah's execution was a mere example of what they were capable of doing, to those who refuse to follow their threatening orders and tries to escape their captivity.

As the civilians were continued to be forced by the soldiers on their way to be imprisoned in the former mall-turned-mega-prison in the evacuated city of Los Angeles, the careless operatives had intended on abandoning Stane's corpse, with one Hydra soldier even accidentally causing the explosion of the gasoline station near Stane where he died, after he decided to smoke a cigarette near the gasoline station, which causes his body to be completely burnt, or even disintegrated if possible.

Retrieved from "https://marvelcomicsfanon.fandom.com/wiki/Obadiah_Stane_(Earth-61615)?oldid=235862"
Community content is available under CC-BY-SA unless otherwise noted.