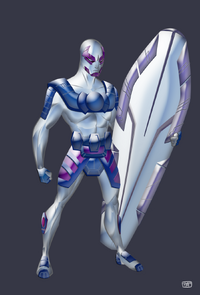 Norrin Radd was born on the planet Zenn-La, part of an extremely long-lived and technologically advanced humanoid race which had created a worldwide utopia devoid of crime, disease, hunger, poverty, and want of any kind. Norrin's father named him after his great-grandfather. Norrin was pressured by his father to live up to his great-great grandfather's name and raised as a grimly intellectual youth, encouraged to seek knowledge, advancement and achievement rather than the aimless hedonism which had come to dominate Zenn-Lavian society.

At age nineteen, Norrin's parents died under unknown circumstances. With the weight of his father's dominance lifted over him, Norrin began to seek excitement and adventure on his mundane planet which would eventually lead him to meet and fall in love with Shalla Bal.

Norrin's life changed forever when a menacing humanoid silhouette and annihilated Zenn-La's long-neglected defense systems. Convincing a Council of Scientists member to provide him with a spaceship, Radd soon confronted the invader known as Galactus.

After learning Galactus' intentions were to devour the planet, Radd pleaded with Galactus to spare his planet, to spare his love. Galactus asked what he could do for him in return if he agreed to sparing Zenn-La, Radd offered to become his herald and seek out new worlds for him to sate his hunger in exchange for Galactus sparing Zenn-La. Galactus agreed, transforming Radd into a silver-skinned, cosmic-powered super-being.

For several years Norrin, now going by the name Silver Sulfer, would serve Galactus well in devouring many planets. For many years, the Surfer wondered if this was karma for taking his previous life for granted and wanting to be adventurous. The Silver Surfer hated Galactus and himself for helping a monster destroy civilizations but would remember he was only doing it for Shalla.

Galactus would go on to discover the planet Earth, a planet rich with energy that made it very desirable to Galactus. Galactus sent the Surfer to scout the Earth and search for any potential risks to which he did.

Upon arriving on Earth, the Surfer caused widespread panic which led to the Fantastic Four having to intervene, Silver Surfer engaged in a lengthy battle with the superpowered team. Taken aback by the resilience and abilities of these humans, he admired them in a way although he nearly defeated the team he was knocked unconscious by a sneak attack from The Thing.

The Surfer later woke up in the Baxter Building, separated from his board. After waking up he was questioned by the scientist Reed Richards. The Surfer saw this as an opportunity to finally rid himself of his servitude to Galactus and redeem himself, Surfer told Reed everything, from his past, to all the information he knew about Galactus. The Surfer would then go on to warn the Fantastic Four that Galactus plans to devour this planet and they'll need [Silver Surfer's] help if they want to stop him.

After the Fantastic Four contacted Nick Fury, he asked them to bring Silver Surfer in for questioning.

Upon arriving to the Triskelion Cable attacks Silver Surfer for all the horrendous things he'd do in the future, the two engage in a fight that almost destroys the Triskelion, the Silver Surfer ends the fight with his foot on Cable's throat and explains to him that he apologizes for the horrible things he's done and regrets them, but he did it for his planet. Cable reluctantly forgives Silver Surfer and the two come to an understanding.

While on a date in Manhattan, Peter Parker and Mary Jane Watson see Galactus' towering figure of New York. Peter informs MJ that he has to go to which she agrees and tells him to be safe.Spider-Man makes his way to Galactus, seeing as he has no chance in stopping him he begins saving citizens from collateral damage caused by Galactus. Suddenly he sees a car about to fall off the Queensborough Bridge, he grabs it but struggles to pull the car as he is about to lose his grip Daredevil enters and saves all the people inside the car. Spider-Man and Daredevil look into the sky and wonder how on Earth they'll defeat Galactus, Daredevil says all they can do now is help the people and let the big guns handle it.

The Avengers, Fantastic Four and X-Men arrive and attack Galactus. Hulk, Thor and the Thing are the heaviest hitters and causing the most damage to Glactus until he blasts them with cosmic energy causing Hulk to revert into Banner and Thor and the Thing to be knocked unconscious. Without their heavy hitters the three teams are decimated by Galactus' powers. As Galactus is about to kill the three teams, Sue Storm protects them with a psionic shield bubble. Silver Surfer and Cable arrive to help, while Cable is quickly knocked out Silver Surfer gives Galactus a run for his money, realising he can't defeat Galactus alone, Silver Surfer retreats and uses an untapped power the allows him to teleport himself, the other superheroes (including Spider-Man and Daredevil) back to the Triskelion.

The Power Cosmic: The Silver Surfer possesses the Power Cosmic, which is the core from which his other abilities manifest from. This power was granted to him by Galactus.

As Norrin Radd, the Surfer was a scientist, a dreamer, and something of a philosopher, skills which he sometimes finds quite useful. The Surfer, however, is only an average hand-to-hand combatant, depending almost entirely upon his cosmic powers in battle. After his time on Sakaar, Surfer gained some combat experience, making him a more dangerous combatant than ever.

Retrieved from "https://marvelcomicsfanon.fandom.com/wiki/Norrin_Radd_II_(Earth-1111)?oldid=234924"
Community content is available under CC-BY-SA unless otherwise noted.