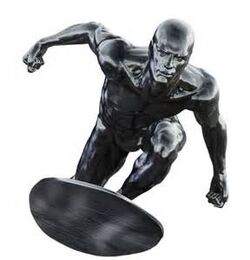 Single
Occupation
Space-faring Adventurer and Explorer; formerly scholar, astronomer, Herald of Galactus
Education
Tutored in science by Jartran Radd and in the nature of the universe by Galactus; self-taught in various areas, especially history, and absorbed much Zenn-Lavian knowledge from "hypno-powered study cubes"
Origin
Origin
Zenn-Lavian transformed into an Intergalactic Herald by Galactus
Place of Birth
Somewhere on Zenn-La, Deneb System, the Milky Way Galaxy
Creators

Little is known about the Silver Surfer's life before Galactus attacked Skrullos. It can be assumed to be similar to his mainstream counterpart.

After Captain America, Spider-Man, Wolverine, and Thor secured the Muonic Inducer from Galactus, Silver Surfer was the one to incapacitate him. 2 years later, he became an active participant in the Secret Invasion against the Skrulls.

As Norrin Radd, the Surfer was a scientist, a dreamer, and something of a philosopher, skills which he sometimes finds quite useful. The Surfer, however, is only an average hand-to-hand combatant, depending almost entirely upon his cosmic powers in battle. After his time on Sakaar, Surfer gained some combat experience, making him a more dangerous combatant than ever.

Retrieved from "https://marvelcomicsfanon.fandom.com/wiki/Norrin_Radd_(Earth-6109.2)?oldid=251736"
Community content is available under CC-BY-SA unless otherwise noted.