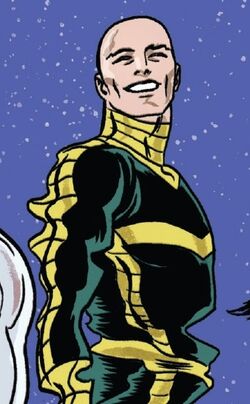 It doesn't take cosmic power to be a hero. Believe me, power only corrupts.

Norrin Radd was imbued with the power cosmic by the entity known as Galactus in order to spare his home planet of Zenn-La. For the next millennia, Radd led Galactus from planet to planet as the Silver Surfer.

It wasn't until their arrival on Earth that Radd finally stood against his master, siding with the heroes like the Avengers and the Fantastic Four. The Silver Surfer would go on to become one of the galaxy's greatest heroes, and fought against the Order of the World Tree during their initial expansion.

After exhausting the last of his power, he transferred the energy force of the power cosmic to his friend Johnny Storm, who became the Inhuman Torch, a member of the Guardians of the Galaxy. Despite losing his connection to his power, Radd decided to join the Guardians as well.

Retrieved from "https://marvelcomicsfanon.fandom.com/wiki/Norrin_Radd_(Earth-2001)?oldid=262188"
Community content is available under CC-BY-SA unless otherwise noted.