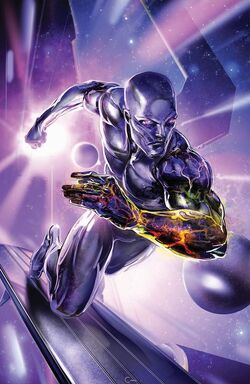 The Bringer of Death
Identity

I will never forgive myself for the chaos I have wrought. All I can do is attempt to make amends.

Once a family man living on the technologically advanced planet of Zenn-La, Norrin Radd was dedicated to his loving family. However, their life was upended when Galactus arrived on Zenn-La. The military was able to eliminate his herald, leaving him seemingly vulnerable.

But he was not vulnerable. Galactus was fully prepared to destroy the entire planet, so Norrin offered up his own life in exchange for his planet. Galactus accepted the offer and imbued Radd with the Power Cosmic, turning him into the Silver Surfer.

For the next several decades, the Silver Surfer led Galactus from planet to planet, standing by unflinching as he wiped out countless civilizations. But over time, the overwhelming guilt began to weigh on Norrin. By then, his family would have been dead. He would never see them again. He began to wonder what he was gaining out of serving Galactus.

When Galactus arrived, the Silver Surfer was kept in S.H.I.E.L.D. captivity, separated from his board. But when it became clear that the combined might of Earth's heroes could not defeat him, the Invisible Woman freed Norrin, who used his power to drive Galactus away from the Earth.

Since then, the Silver Surfer has dedicated his life to traveling the cosmos in an attempt to breathe new life to the species that had been eradicated by Galactus. His mission of righteousness eventually led to him becoming something of a legend across the galaxy so that when he went on to encounter the Guardians of the Galaxy, they treated him like a deity. But Norrin had become humbled, and laid himself bare to them. The team understood how he felt, empathizing with his struggle, and respecting his ambition. They offered Radd a home with them, which he accepted. He saw becoming a Guardian of the Galaxy as a more direct way to do some good, out of hopes to balance out his past evils.

Retrieved from "https://marvelcomicsfanon.fandom.com/wiki/Norrin_Radd_(Earth-101)?oldid=251734"
Community content is available under CC-BY-SA unless otherwise noted.