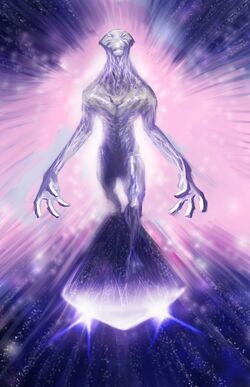 Earth-100000
Base Of Operations
The Nexus
Characteristics
Gender

The multiverse is in peril. It is now your responsibility to save it.

Norrin Radd lived a similar life to most of his counterparts. He offered up his own life to Galactus in order to save his home world, and became the Silver Surfer, his herald. For decades, he let Galactus across the galaxy, watching silently as he devoured planet after planet.

However, Galactus's appetite grew beyond planets. As he began experimenting with devouring the entire universe, the Silver Surfer decided it was time to intervene. The two engaged in a glorious battle, and the conflicting forces of the power cosmic resulted in the multiverse tearing.

Radd found himself falling between the cracks until he eventually arrived in a place outside the multiverse, called the Nexus.

It was in this place that he discovered he now had access to every reality the multiverse had to offer. After doing extensive studying, he discovered an infinite amount of them were suffering from the cracks and required repairs. However, he didn't believe he had the power to fix it himself, which led to him plucking multiple alternate versions of Earthly and occasionally cosmic heroes and villains in order to send them on perilous missions that could mend the cracks.

In the end, he ended up forming two teams; Team X and the Squadron Supreme. While Team X's main mission was to save targets of interest, the Squadron were primarily focused on assassinations. Each time a team member would perish on a mission or find a purpose for themselves he would replace them with someone else from the multiverse, but eventually he became tired of the constant failures and deaths resulting from both teams.

Eventually, when Team X lost the Blob, one of their newest team members, the Sentry decided it was time for him to get directly involved. He assumed command of the Team, and quickly earned the disdain of his team, at that point consisting of Cyclops, Okoye, Wasp, Mockingbird, and the Scarlet Speedster. After they led a rebellion against him, Silver Sentry placed them all in stasis and decided to recruit a new team.

He selected alternate versions of Captain America, Valeria Richards, Yelena Belova, Colossus, Rocket Raccoon, and Ghost Rider. For the few missions they went on, they had a fairly impressive success rate, but inevitably discovered the Sentry's ruse. They were able to free the others from stasis and team up against the Sentry.

The battle was hard fought, claiming the life of Mockingbird, and eventually the Cosmic Ghost Rider was able to channel enough of his own power cosmic to overpower the Sentry, overloading him with energy until he exhausted all of his power. As he lay dying, he warned the Team that they would never be able to defeat Galactus without him.

Retrieved from "https://marvelcomicsfanon.fandom.com/wiki/Norrin_Radd_(Earth-100000)?oldid=253076"
Community content is available under CC-BY-SA unless otherwise noted.