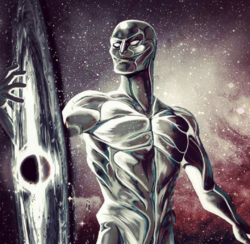 God, The Herald to the Devourer
Identity

I have stored the Power Sone in the pocket dimension located within my board. I swore I would never open the portal again, even if my life depended on it... but things have changed. This is bigger than just me. If the Earth is to live... Thanos must claim the Power Stone... and I must die.

For centuries, Norrin Radd served as the Herald of Galactus, needlessly destroying thousands upon thousands of planets. However, after an encounter with the heroes of Earth known as the Fantastic Four, the Silver Surfer became determined to lead Galactus away from devouring life.

This newfound sense of purpose is what led to him joining the mysterious group known as Infinity Watch, and tracking the Power Stone to the planet Morag. Buried under miles of ocean, the Silver Surfer scoured the planet until he located the Stone, and stored it within his board, before allowing Galactus to completely devour Morag.

Hoping this would sew rumors of the Power Stone's destruction, it only ended up fueling Thanos's determination even more. Already having claimed the Soul Stone from his brother, Eros, Thanos began tracking the Surfer.

Radd led him to the Earth out of hopes that its heroes would be able to fend him off, but after an attack from the Soul Stone made him feel the pain of everyone he had ever failed by allowing Galactus to devour their worlds, he keeled over in defeat, already feeling his life force draining.

Although the Avengers and the X-Men were present with him on the moon, it became clear that this battle would not be won by them. Calling out to the most powerful hero he could find, Storm of the X-Men, he transferred his Power Cosmic to her, and thus revealed the Power Stone in an attempt to distract Thanos.

Giving the heroes a chance to escape, Radd attempted to obliterate the Titan, only to discover that without his power, he had no way of withstanding the overwhelming radiation of the Power Stone, and thus met his death, allowing Thanos to claim his second Infinity Stone.

Retrieved from "https://marvelcomicsfanon.fandom.com/wiki/Norrin_Radd_(Dimension_0)?oldid=263160"
Community content is available under CC-BY-SA unless otherwise noted.