See also Green Goblin, Norman Osborn for a complete list of references to distinguish between these closely named or closely related articles. 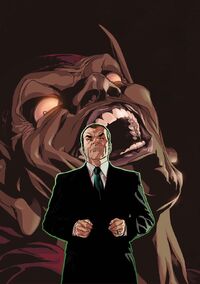 Auburn
Unusual Features
Huge scar in the middle of his chest, which he gained after he was impaled by his own glider; claws, fangs, and a prehensile tongue while bonded with the Carnage symbiote; formerly facial features horribly modified by plastic surgery.
Status
Citizenship

What? No! I am your master! STOP! What are you doing? Listen to me! Listen to The GREEN GOBLIN!

Retrieved from "https://marvelcomicsfanon.fandom.com/wiki/Norman_Osborn_(Prime_Universe)?oldid=232639"
Community content is available under CC-BY-SA unless otherwise noted.