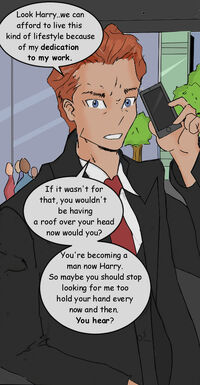 I'm something of a scientist myself...

Norman Osborn was the son of the wealthy business inventor Amberson Osborn. He had a decent childhood until Amberson lost most of the family fortune after the failure of his invention company and took out his rage on Norman. This abuse had Norman realize that only the strong survive and that he will never be weak. Soon, Norman attended Empire State University with a science scholarship and received degrees in chemistry and electrical engineering. He would marry a woman named Martha and would and have a son together. Years later, his son Harry introduced him to his best friend Peter Parker, who Norman took an immediate liking to Peter when he was informed that Parker can understand his work and Norman expressed his desire to recruit him into Oscorp. His son however, resented his father's apparent favoritism toward his friend Peter. At some point, his company was contracted by the Unites States Military to create a new Super-Soldier serum which led towards the creation of "Oz". Osborn's colleague, Doctor Mendel Stromm, felt it important to reveal to the Military official General Thaddeus Ross, who oversaw the Oz project that some of the test subjects had gone insane. After the Ross heard that, Osborn was threatened with a tight deadline.

Meanwhile, the arrival of Spider-Man catches the attention of Norman. Anxious to develop his Oz Serum, the main goals of which are already exhibited by the super-hero, Osborn orders the capture of Spider-Man. At some point, The Gentleman (Gustav Fiers) discusses with Osborn that the Kingpin has to offer: help create super villains to distract Spider-Man from arresting his thugs in exchange for helping Norman completing his Oz serum by capturing him. Osborn accepts. The Gentleman brings one of his thugs, Flint Marko, Marko is then taken inside an underground experimental room where Norman Osborn is, where he became Sandman, a being comprised of and able to control sand. After Sandman failed to capture Spider-Man, Osborn tips off the Kingpin of an experimental suit of armor from the Horizon Labs. The tech is stolen by another one of Kingpin's thugs, Alex O' Hirn who takes up the alias of Rhino.

After Rhino was defeated by Spider-Man, Norman calls off the deal with the Kingpin and tell him that Spider-Man will suspect who is behind the creation of Sandman and Rhino and hence Osborn must stop creating more supervillains to throw Spider-Man off the track. However, The Gentleman threatens Osborn that they stop making supervillains when Kingpin wants to. Norman went back to his studies. Eventually the Military decided to give the Super-Soldier contract to another company. Due to this, Norman's company decided to expand and in doing so, his former partner Mendel Stromm assumed control of Oscorp on the condition that Norman step down as CEO.

Enraged, Norman returned to his lab and immediately have one of his scientist's inter mixed Norman's DNA with Oz Serum, hoping for an successful outcome and become a heightened version of himself to prove his formula could succeed. But the process was a failure, Norman gained superhuman strength and agility from the experiment but is driven partially insane as he killed the scientist and stole the jet glider from Oscorp. Remembering a giant green goblin monster from childhood nightmares, he created a costume that resembled that monster, and he became the "Green Goblin". Norman Osborn now as the Goblin killed the Board of Directors during a festival in Times Square in retaliation, thus removing the threat to his takeover of Oscorp and inadvertently killed Capt. George Stacy. The Goblin's appearance at the festival also marked the beginning of his animosity towards Spider-Man. He fights off Spider-Man but was quickly defeated by the hero. Even though Goblin viewed Spider-Man as the son that he always wanted, strong and intelligent; Spider-Man would only get in his way of his plans, which was to become the new kingpin of crime. While snooping around Fisk's building, he was captured and brought before Fisk, who revealed himself as the Kingpin of Crime. The Green Goblin offered partnership to the Kingpin, and vowed to defeat Spider-Man.

After experiencing hallucinations of the Green Goblin, Norman's evil side convinces him that he and Spider-Man should work together as partners. Later on, the Green Goblin hires various crooks to aid him in overthrowing the Kingpin in order to become the reigning crime boss in New York. Goblin then sent out a few of his goons to start a shoot out with Police Officers to grab Spider-Man's attention and equipped them with Goblin masks and rifles. And just as Goblin thought, Spider-Man intervenes and defeated the thugs with incredible ease. As Spider-Man was distracted with the thugs, Goblin grabs Spider-Man using a cable cord and drags him across the neighborhood. Goblin then drops him off on a rooftop and offers an opportunity for the hero and the Goblin join forces to take over New York but he refuses. Green Goblin decides to defeat and possibly kill Spider-Man. The fight extends from all over streets of New York. They are evenly matched although Goblin uses his razor bats and bombs that was filled with a gas that nullified his wall-clinging ability and spider-senses, gaining a upper advantage. The fight continues at a factory, where Goblin finally defeated Spider-Man. The goblin then ambushes and unmasks Spider-Man successfully, revealing his true identity to be Peter Parker. He then let Spider-Man escape, so as to prove his superiority.

Later, Norman contemplates with his Goblin persona saying he can't go through with it but the Goblin tells him that Spider-Man has to be stopped. The next day, Norman would later invite Peter to his home where he revealed himself to Parker as the Green Goblin, telling him that he must give up his life as Spider-Man and work for him, or he and his loved ones would die. When Parker seemingly accepts, the Goblin takes the mask of Spider-Man that he'd gotten from their last fight and brings it to Kingpin, proving to him his loyalty and that Spider-Man was no longer gonna be a problem.

Goblin's plans of taking over Kingpin's empire was foiled however when the police ambushed their current base of operations. Believing that Goblin had set them up, Fisk doubled crossed the Green Goblin and ordered his men to execute him while he fled via Helicopter, not knowing it was actually Spider-Man who tipped off the feds. Goblin and Spider-Man brawled until Goblin hots him with his hallucinogenic gas to wear off the wall crawler, but Spidery manages to resists it's effects and delivers him a punch. They fight some more until Spider-Man deflects one of Goblin's pumpkin bombs which causes him to crash into a mixture of live wires and chemicals and a fire starts, sustaining him a case of immediate amnesia, forgetting that he was ever the Green Goblin in the first place. Spider-Man quickly changed out of his Goblin gear and pulled Osborn out of the burning building for the police to take him to a hospital, with Spider-Man telling the authorities he was an hostage and that the Goblin was killed in the fire. Harry and Peter visits Norman in the hospital who offered to shake Peter's hand after being reintroduced to Peter, starting a clean slate with their relationship.

Genius Level Intellect: Even before consuming the Oz serum, Norman was extremely smart and intelligent, was extremely skilled with mathematics and science, possessing an immense knowledge of chemistry and the side-effects of drugs on humans and animals. The Oz Formula enhanced Osborn's mental capacities and creative talents. Aside from his physical advantages, the serum also greatly enhanced Norman's already highly above average intellect, making him a true genius capable of making progress in advanced areas of genetics, robotics, engineering, and applied chemistry that most professional scientists can scarcely comprehend.

Expert Marksman: As the Goblin, Norman uses various hand-held throwing weapons such as explosives and razor projectiles which he will throw with great aim rarely ever missing his target. He is also a skilled sharpshooter with various firearms.

Insanity: A downside to the increased intellect and physical capabilities afforded by the Oz formula, is that it is responsible for Osborn's insanity.

Retrieved from "https://marvelcomicsfanon.fandom.com/wiki/Norman_Osborn_(Earth-981)?oldid=265788"
Community content is available under CC-BY-SA unless otherwise noted.