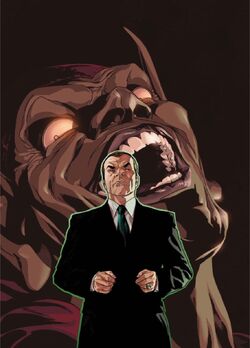 Auburn
Unusual Features
Huge scar in the middle of his chest, which he gained after he was impaled by his own glider
Status
Citizenship

As a child, Norman Osborn became obsessed with gaining wealth and power. His father, a failed business inventor who claimed that he was swindled out of his inventions and personal fortune, took out his rage on Norman. Norman would not allow himself to become a failure like his father, he realized that he could not depend on him for financial security, thus began working after school. Norman studied biology, chemistry and electrical engineering at Empire State University, and also took a number of courses in business administration. One of his teachers was Professor Mendel Stromm. They became good friends and later formed a business partnership. Since Norman put up the bulk of the financing, they called their company Oscorp Industries.

One day, as the co-owner of Oscorp, Norman's obsession with wealth and power, made him decided to take full control and had his business partner Mendel Stromm get shot and killed by a hitman that Osborn himself secretly hired to assassinate his old friend turned one-sided rival.

Birth of the Green Goblin

After fully controlling Oscorp, Norman Osborn became a corrupt industrialist and scientist who tried to perfect the Super-Soldier drug for S.H.I.E.L.D., but all of its experiments had failed. Finally, he was experimenting with perfect a formula that would make him superhumanly powerful. However, his son, Harry, tired of always being ignored and rejected by his father, switched the chemicals in the serum, causing it to explode in his face. After this fateful accident, Osborn spiraled into insanity, causing him into making him planning to become the most powerful mob boss of all. Remembering a giant green goblin monster from childhood nightmares, he created a costume that reflected that monster, and he became the villainous maniac known as the "Green Goblin."

After the lab accident, Osborn goes on a revenge spree killing every individual and taking down every group whose supposedly a threat to him, his company and his works, and then tries to get Spider-Man to join his crusade, but rejected and chose to fight and stop his plans instead, leaving Norman furious. He then tried to traumatize Peter's Aunt May and even kidnaps his and attempted to kill his love, Gwen Stacy, leading his battle with Spider-Man at the city of New York. Goblin attempted to defeat him in the Brooklyn Bridge, but it still ended with the Goblin getting defeated after he reveals himself to be Norman Osborn, surprising Peter (who was also unmasked at the time, causing for Norman to know his identity as well), before he accidentally got impaled on his own glider, seemingly killing him. His final words were requesting him to never tell his son, Harry about him being the Green Goblin.

After his supposed death, Norman returns once again as the Green Goblin after his accelerated healing factor saved him from dying, but was defeated by the Spider-Man once again, now with the help of the Avengers and S.H.I.E.L.D., who took him later into custody afterwards for illegally altering his altering their genetic codes. Norman then later escapes his capture and began his plan and crusade to destroy and ruin Spider-Man's life once again. He even later gained a few several enhancements form the Oz Formula that turns him into a monstrous Goblin-like creature at will, also known as the "Ultimate Goblin" which also grants him the ability to generate and control fire.

Norman eventually found a way of ruining Peter's life. This time Norman abducts his long-time friend, love interest, and ex-girlfriend, Gwen Stacy who was at Peter’s home waiting for him. Spider-Man tracks the Goblin to the Brooklyn Bridge, where a fight ensues and the Goblin throws Gwen off the side of the bridge. Spider-Man shoots a web line to catch the falling Gwen, but the jolt from the sudden stop appears to snap Gwen's neck. To this day Peter still feels guilty for her death, in the same way he feels remorse for his Uncle Ben's death. Enraged by the Goblin's actions, Spider-Man continues fighting the Goblin on the bridge. In the subsequent fight, Spider-Man is able to pummel and beat the Goblin in a fit of rage, but Nick Fury and the rest of S.H.I.E.L.D. manages to find them both and stops Peter from delivering the killing blow on Norman. Norman, who was weakened and was defeated, activated his Goblin Glider to self-destruct so that he could take Peter and everyone else with him, but Peter manages to get Nick and a few agents away from the explosion. Only Osborn and a few agents were killed since they were standing at the heart of the explosion. Peter doesn't feels a sense of justice or any remorse in Norman's own death and even hoped that he rots in hell.

Osborn was more likely dead after the explosion, leaving his lifeless body, but somehow his accelerated healing factor in his system had been triggered and manages to "resurrect" him and slowly regenerates his disfigured body before getting his "lifeless" body taken once again by the organization into custody, who was also shocked seeing him, now miraculously alive. Later, Norman was declared "dead" to the authorities and to the public by S.H.I.E.L.D., implying that he didn't survive from the explosion and the truth was never told, not even to Peter, until it was eventually revealed to him about his survival at a much later time.

Norman still remained a dangerous prisoner, who had his DNA frequently being studied and experimented by several scientists, including the great Hank Pym in a highly-secured containment unit at a S.H.I.E.L.D. facility (who was still curious about the Oz formula managing to resurrect Osborn), until much later when Hydra attempts infiltrating the facility, in which Osborn and other dangerous illegal super-soldiers manages to break free and escape their prison cells during the outbreak.

The majority of the prisoners were tranquilized by S.H.I.E.L.D. and were put back to their cells after the incident, while Norman and a mysterious figure were the only two prisoners who had successfully escapes the entire facility, who also manages to steal several formulas of the Super-Soldier Serum. After the incident, he continues his criminal crusade as the Green Goblin once again. With every one of these defeats from Spider-Man, the Green Goblin became more determined. In time, Osborn became totally obsessed with Spider-Man and finally began directing all of his efforts to finding a way to conquer his adversary. At some one point, he and a fellow Spider-Man rogue known by many as Doctor Octopus had agreed and came in touch with every major super-powered villain who had battled the wall-crawler.

After forming this superhuman criminal group, they dubbed this alliance as the Sinister Seven, but was later changed to Sinister Six after the apparent death of Norman during the events of Ultimate War, who seemingly died at the hands of S.H.I.E.L.D. agents while Osborn was in a weakened state, heavily exhausted from an intense duel with Spider-Man which rendered him back to his human form to begin with. He later again returned as the Green Goblin once more, but he still refuses on joining his old team once again as usual, believing that they're already useless to begin with, unless he might be needing to use them again against the web-slinger, if he has to. Despite seemingly dying after getting shot repeatedly in the finale of Ultimate War (including one to the head), he was revealed to be alive, thanks to the secret that S.H.I.E.L.D. had their own replicated versions of the Oz Formula to keep Osborn long enough while they properly treat to his severe wounds, and under their custody in the Triskelion, although he was later transferred in another S.H.I.E.L.D. prison facility somewhere in Washington in the complicated agency's new intention to use him for their own future agendas.

After the events of Secret Invasion, a seemingly-changed Norman Osborn became a hero by killing the Skrull Queen, Veranke, on national television. He was put in charge of the Superhuman Defense Initiative. After dismantling S.H.I.E.L.D., Norman makes himself Director of a newly-secret organization known as H.A.M.M.E.R., essentially the new S.H.I.E.L.D. of Norman Osborn, decided that there was a need to make some new Avengers. Norman started recruiting internally from one of the most deadly and one of the most dangerous villains that were imprisoned at the Raft since the days of Civil War, in order to form the Dark Avengers. Bullseye became the teams version of Hawkeye; Scorpion, Ares, and Sentry went along with Osborn and when Ms. Marvel was asked to join, she bitterly refused, feeling that she might know of Osborn's true intentions. Much to Osborn's disappointment, he instead recruited Moonstone to be the super criminal Ms. Marvel of his team.

Norman would have later returned to the public as the Iron Patriot courtesy of S.H.I.E.L.D. (who thought he actually had a serious case of amnesia since the end of Ultimate War), and fooled the whole world into thinking he's a hero under the guise of the Iron Patriot and outed many heroes as cowards. His eventual defeat and ultimate downfall as a false hero was caused by his own insanity and desperation when he and his forces had led a Siege on Asgard, ending his infamous "Dark Reign" over the world. In the aftermath of Siege, a ravenously insane Osborn was imprisoned within the Raft, with Sofen, Bullseye, and Gargan being imprisoned in several other maximum prisons throughout the United States, with the exception of Noh-Varr, who was honored by the authorities and his allies for helping them defeat his own evil team. In the aftermath of Siege, Osborn was declared deceased to the authorities and the public altogether, with exception of S.H.I.E.L.D. and E.D.I., in order to keep his invasion on Asgard unveiled to everyone else but still expose him of his crimes as the Iron Patriot.

After a few months of being imprisoned within the Raft during the early days of the Heroic Age, a research and development team led operated on an unconscious Osborn, who was in a medically-induced coma, and injected him with a newly-developed version of the Oz Formula antidote, effectively depowering him, or they supposedly thought at first. Adding to this was for the first time in years, Norman was now sane, most of the time. The later effects of the antidote revealed that the latter actually didn't depower him, but antidote, along with the countless of operations performed on him, rather diminished Osborn's split Green Goblin personality as time went by, treating his long-time disorder. And despite knowing that his Green Goblin persona was finally gone, Norman would still sense the lingering madness and insanity within him, along with the burning rage he still possesses towards the heroes who took him and his empire down, especially Spider-Man, his undying archnemesis.

Oz Formula Enhancements: The Oz Formula mutated Norman Osborn, which granted him superhuman abilities. Combining the formula with the Super-Soldier Serum and the Hulk Serum (Banner's blood) would also make Norman Osborn turn into a monstrous Goblin-like creature, also known as the "Ultimate Goblin" which grants him to have the powers of pyrokinesis, the ability to generate and control fire.

Retrieved from "https://marvelcomicsfanon.fandom.com/wiki/Norman_Osborn_(Earth-61615)?oldid=238143"
Community content is available under CC-BY-SA unless otherwise noted.