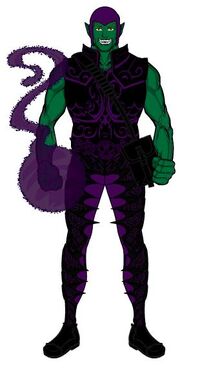 Norman was born to a wealthy family but his father lost it, leading them to poverty. In his shame his father Amberson became abusive towards his family. Psychologically so towards his son. Amberson would tell Norman stories of a creature called the "Demogoblin" to frighten him and in order to try and get him to "man up" from his fears would lock him in a dark room of the rundown Osborn estate during stormy nights where Norman would come to fear that the Demogoblin was stalking him. It was a monster of legend that was said to ride atop a giant bat, be followed by a swarm of bats, and have the ability to throw fire.

However, Norman had a keen intellect and managed to get a scholarship to Empire State University where he would meet a fellow brilliant mind in Otto Octavius when both took a course under the up-and-coming professor Miles Warren, and together they'd start a business together. Since Norman put up the bulk of the financing, they called their company Osborn Chemical, or Oscorp. Something that Otto became embittered about but didn't argue against as he was whilst arrogant in his abilities to timid to fight back on it. Becoming Norman's chief-assistant and lab partner. One of Norman's long-term projects was seeking to create a performance enhancing serum in the same vein as the super soldier serum that created Captain America.

Norman went on to marry his college sweetheart Emily, however she'd not too long after die due to complications during the birth of their son Harry. Something that Norman just couldn't let go of.

Norman also began to run in the same circles as other members of New York's elite like the fashion company mogul Roderick Kingsley and through him wound up joining into an exclusive and super-secretive men's group called the Kobold Club that was composed of several of the world's elite including the likes of politicians, businessman, and celebrities. Every year they put on a summer camp outing in a site called Kobold Grove where they'd come together for what they claimed was a mere vacation away from the stresses of their normal lives but was long rumored to be a place where shady backroom dealings transpired. A camp in which mock pagan ritual would take place and a giant statue of a goblin stood. And after awhile Roderick, the club's chairman, would consider inviting Norman into their innermost circle.

Norman became a particularly shark-ish businessman and developed criminal ties. One of which was New York's very own Kingpin of crime. With the appearance of Spider-Man who had begun meddling in his affairs and refused an offer to take bribes from him to look the other way on crimes of his choosing, he decided to reach out to Norman with the offer to help create supervillains to distract the hero from his operations in exchange for money and a supply of test subjects for his lurid experimentation. Norman agreed and that would result in the emergence of a number of Spider-Man's foes.

As the Green Goblin Norman would wage war against the Kingpin in a bid to take over New York City's criminal underworld. Eventually managing to amass a good number of followers. Eventually the Kingpin would become desperate enough to break out Dr. Octopus and some other super-powered criminals from prison in order to take both he and Spider-Man on. Dr. Octopus taking charge as the leader of the team that came to be known as the Sinister Six. The Green Goblin however knew how to play this to his advantage.

After his initial defeat at their hands that he barely escaped, Norman went to Spider-Man with the offer of working together to find a way to defeat them. He reluctantly accepted with the plan to capture him afterward, but regrets it when he sees that the Goblin is going to take out a swath of civilians in a trap for them. Leading to Spider-Man turning on and having to fight him as well.

However it would be his familiarity with Otto Octavius that'd give Osborn a winning strategy. He knew that Otto was an insecure but arrogant man who always resented feeling underappreciated or like a second fiddle. So taunted him over his having become nothing more than a bulldog for the Kingpin. That along with an assassination attempt on his life framed to look like it was Kingpin's doing would eventually lead him to having the Six turn on him.

Harry would eventually discover that his father was the Green Goblin when he found him in human form collapsed in the lab. When he asked Norman about this he feigned ignorance, telling him that he was not sure. But that ever since an accident in the lab blew up on him he's been having black outs. Coming to convince his son that the Green Goblin was in fact an alternate personality. Helping to win over his sympathy and getting him to refuse to turn him in to the authorities.

Retrieved from "https://marvelcomicsfanon.fandom.com/wiki/Norman_Osborn_(Earth-515)?oldid=259711"
Community content is available under CC-BY-SA unless otherwise noted.