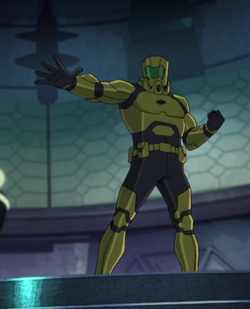 Inhumans are an aberration. After our work is done... Humans shall inherit the Earth!

Norman Osborn is the former CEO of Oscorp, which was bought out by Potts International, putting Norman out of a job. Having previously lost his wife to cancer, Norman then suffered the loss of his son, Harry, in an incident where Spider-Monkey was trying to stop an armed robbery. Filled with anger, Norman discovered the organization of scientists with visions beyond that of what society deems acceptable, called AIM.

After joining AIM, it didn't take long for Norman to rise to power. Especially after killing the former Scientist Supreme, Monica Rappacchini. After taking control, Norman and his team began manufacturing supervillains to take on the Squadron Supreme, using advanced technology. They also put together a secret brain trust to try and crack the Terrigen formula, despite spreading disdain for Inhumans among the organization.

Retrieved from "https://marvelcomicsfanon.fandom.com/wiki/Norman_Osborn_(Earth-1515)?oldid=244578"
Community content is available under CC-BY-SA unless otherwise noted.