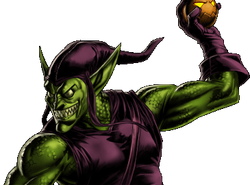 Widowed
Occupation
Professional criminal, adventurer, owner of Osborn Industries and OsCorp
Origin
Origin
In a explosion, he was accidentally exposed to a chemical formula that increases strength and intelligence, Osborn became the Green Goblin as well as criminally insane.
Place of Birth
Hartford, Connecticut
Creators

Everyone dies. Even Norman Osborn

As a child, Norman Osborn became obsessed with gaining wealth and power. His father, a failed business inventor who claimed that he was swindled out of his inventions and personal fortune, took out his rage on Norman. Norman would not allow himself to become a failure like his father, he realized that he could not depend on him for financial security, thus began working after school. Norman studied chemistry and electrical engineering in college, and also took a number of courses in business administration. One of his teachers was Professor Mendel Stromm. They became good friends and later formed a business partnership. Since Norman put up the bulk of the financing, they called their company Osborn Chemical (Oscorp), a company that employs Dr. Curtis Connors.

Norman married his college love interest and they had a son: Harry. Unfortunately, his wife became ill. After she died, Norman buried himself in his work and rarely had time for young Harry. As the co-owner of Oscorp, Norman Osborn, loving wealth and power, decided to take full control and had his business partner, Mendell Stromm, arrested after he discovered he was committing embezzlement, granting Norman complete control over the company; making him the official CEO of Oscorp. While going through Stromm's notes, he found a secret formula that would make him superhumanly powerful. However, his son, Harry, who was tired of always being ignored and rejected by his father, switched the chemicals in the serum, causing it to explode in his face. Later, at the hospital, Norman Osborn found himself thinking more clearly than ever before, not knowing that he would slowly reach insanity.

Attempting to achieve power beyond his wildest dreams, Norman Osborn planned to become the most powerful gang-lord of all by uniting all the independent gangs under his leadership in an attempt to gain control over all of New York's crime. To prove his power and establish his reputation, he decided to choose Spider-Man as his victim of choice (without knowing he was his son's childhood friend), and sent two criminals, the Headsman and Scorcher, after Spider-Man. The two were soundly defeated, and then Norman Osborn decided to take matters into his own hands. Remembering a giant green goblin monster from childhood nightmares, he created a costume that resembled that monster, and he became the Green Goblin.

The Goblin Formula gives him superhuman powers, powers way beyond that of natural limits, surpassing logic. Are thoroughly detailed down below.

Genius Level Intellect: Even before consuming the Goblin Formula, Norman was extremely smart and intelligent, was extremely skilled with mathematics and science, possessing an immense knowledge of chemistry and the side-effects of drugs on humans and animals. The Goblin Formula enhanced Osborn's mental capacities and creative talents. Aside from his physical advantages, the serum also greatly enhanced Norman's already highly above average intellect, making him a true genius capable of making progress in advanced areas of genetics, robotics, engineering, and applied chemistry that most professional scientists can scarcely comprehend.

Expert Marksman: As the Green Goblin, Norman uses various hand-held throwing weapons such as explosives and razor projectiles which he will throw with great aim rarely ever missing his target. He is also a skilled sharpshooter with various firearms.

Insanity: A downside to the increased intellect and physical capabilities afforded by the Goblin Formula, is that it is responsible for Osborn's insanity. While always mentally unstable, the formula has greatly diminished his already fragile grip on reality. His increased mental instability causes him to sometimes be extremely impulsive, not thinking before plunging into a potentially dangerous situation, making it relatively easy to lure him into a trap. Osborn also suffers from the delusion that he is invincible, claiming that "not even death could defeat him" this has caused him to fight when at a severe disadvantage, resulting in his defeat.

Equipment: The Green Goblin's costume incorporated chain mail in the tunic, giving him further protection from high impacts, such as the punches or kicks inflicted during his battles with Spider-Man.
Transportation:

Retrieved from "https://marvelcomicsfanon.fandom.com/wiki/Norman_Osborn_(Earth-1010)?oldid=184749"
Community content is available under CC-BY-SA unless otherwise noted.