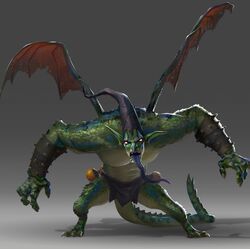 Soon everything you love will burn, and I will be there to laugh at your misery.

Norman Osborn has always been a cold and unfeeling man, even to his wife, Emily, while she was dying of cancer, and his son, Harry, as he was growing up, clearly struggling with school. Norman's first and only priority was always his business; Oscorp. Oscorp was leading the way on experimental biological and technological warfare ever since Stark Industries stopped developing weapons.

After the emergence of the vigilante Spider-Man, Norman became convinced that he could've only gotten his powers from Oscorp's cross species spider experiments. After an intense investigation, Norman concluded that Spider-Man had to be Peter Parker, his son's best friend, and the son of one of his former employees, Richard Parker.

Norman then became obsessed with recreating the success that bred Spider-Man. After countless failures, he started work on his attempt at the Super-Soldier Serum that created Captain America, which he called Oz. Not trusting anyone else, Norman tested the Oz on himself and at first grew green scales on his skin and developed an alternate personality called the Green Goblin.

The Green Goblin stole a plethora of Oscorp technology, including a suit of armor and a glider, in order to wreak havoc on New York City and gain Spider-Man's attention. After a few battles between the two of them and the Goblin's failures to capture the web-slinger, he decided to take more drastic measures. He then started attacking Peter Parker's friends and family, including his Aunt May and his girlfriend at the time, Felicia Hardy. Enraged, Spider-Man beat the Goblin into a brief coma. After he woke up, Norman Osborn discovered what he had been doing and tried to rid himself of the Goblin.

From there, he tried to put most of his focus onto being a ruthless business tycoon, even joining a secret Cabal formed by Doctor Doom and eventually buying out Stark Industries when it went bankrupt after going into the ownership of Vicki Potts. Now that Norman had access to all of Tony Stark's assets, the Goblin resurfaced.

His desires had now gone beyond just Spider-Man. He continued to mix Oz with other experimental formulas in order to yield a monstrous result, which is exactly what he got. Mutating himself into a large, hulking monster with wings, the Green Goblin began his rampage against all those that would call themselves a hero.

Eventually, this would result in a confrontation with Spider-Man and the Avengers, which leads back to his secret underwater lab. During the fight, he accidentally punctures a hole in the walls and the lab starts flooding. While trying to escape, he becomes pinned down by debris and electrocuted by the fried technology, seemingly killing the Green Goblin and Norman Osborn in one fatal blow.

Retrieved from "https://marvelcomicsfanon.fandom.com/wiki/Norman_Osborn_(Earth-101)?oldid=250672"
Community content is available under CC-BY-SA unless otherwise noted.