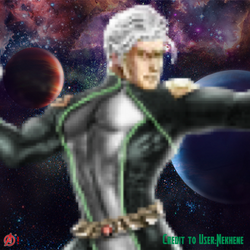 Earth-1010
Base Of Operations
The Marvel
Characteristics
Gender

First appearance
Heroes (We Could Be)

Come with me if you want to be awesome.

Noh-Varr is a member of the Kree race. He would have his DNA altered with cockroach genes to include insectial properties and join the 18th Kree Diplomatic Gestalt, a group that would be charged with peacekeepers and maintaining the cease-fire between that realities Kree and Skrull races. They would travel aboard their ship the Marvel. After a clash with three Astro-Gods, Noh-Varr and his crew were lost in the universe and were attempting to return home. They would however end up over the planet Earth. Their ship would be shot down by Dr. Midas who -- obsessed with obtaining super-human powers -- would seek to claim their cosmic ray powered star-drive to mutate himself. The crash would kill the entire crew (including his parents Captain Glory and Star Splendor and his girlfriend Merree) except for Noh-Varr who would be captured by Midas; however he would use his enhanced abilities to escape captivity. His artificial intelligence Plex would advise Noh-Varr to lay low, however the temperamental Kree had plans to get revenge against the entire human race for the brutal treatment his crew received upon arriving on their world.

He would send his message across in a very destructive manner by destroying blocks of buildings in New York, attracting the attention of S.H.I.E.L.D..

Noh-Varr would soon learn that a social parasite called Hexus (prisoner aboard the Marvel) has been unleashed upon the Earth and become a sentient corporation that was bent on taking over the entire world. Noh-Varr would clash with the forces of the Hexus until he would succeed in destroying it by accessing it's corporate secrets and providing them to it's competitors, crushing it as a business and subsequently destroying it.

Dr. Midas, still seeking out the cosmic ray engine of Noh-Varr's ship would send his daughter: Oubliette Midas, the Exterminatrix, to capture him. Her assault on him was successful and she would turn him over to her father for a violent interrogation. However, she would soon have a change of heart when Noh-Varr had seen her true face and find her attractive, freeing him from her father's clutches and returning him to his ship. Midas tracked them down via a tracking device in the Exterminatrix's mask and send one of the Dark Dimension's Mindless Ones that he had in his possession to destroy them while he attempted to claim the star drive. Exterminatrix was successful in decapitating the creature while Noh-Varr clashed with Midas, who had just used the cosmic ray drive to mutate himself into the Cosmic Man. In the final clash between Noh-Varr and Midas, the Exterminatrix, who used the head of the Mindless One to seemingly destroy her father, would aid Noh-Varr. S.H.I.E.L.D. agents surrounded Noh-Varr's ship, taking him into custody. The Exterminatrix started a reign of terror demanding Noh-Varr's release but she would end up being captured an incarcerated in the Raft. Noh-Varr was imprisoned in the Cube where he declared war on the human race and vow to make the planet Earth part of the Kree Empire.

During his incarceration Noh-Varr was briefly visited by members of S.H.I.E.L.D. who tried to change Noh-Varr's mind and told him to earn his freedom and no longer pursuing his attack on the planet.

During the Dark Reign, Dell Rusk, leader of the Dark Avengers, invaded the Cube and recruited him to join his Avengers as a new Captain Marvel. After their first mission, Noh-Varr slept with teammate Karla Sofen, aka Moonstone.

Noh-Varr was tasked to kidnap Iron Lad and Prodigy, the newest Young Avengers, since Dell Rusk lacked information about them. However, his plan was thwarted by the teenage group, who saved their teammates.

That night, after sleeping with Moonstone once again, he found a dying Skrull outside the Dark Avengers' headquarters. He told him he had been genetically modified to impersonate Captain Mar-Vell for the Skrull Empire and was given his memories. The Skrull said that he had met humans and seen what they were capable of and that they deserved to be saved. Inspired by this, Noh-Varr told Plex to take him back to Hala to try and stop the Kree-Skrull war.

Noh-Varr is an alternate universe Kree warrior, enhanced with cockroach DNA and nanobiology, He has demonstrated enhanced physical capabilities well beyond that of either normal humans or standard Kree.

Superhuman Strength: Noh-Varr is incredibly strong. His strength is greater than that of the average Kree male (whom can press lifting approximately 2 tons) and far exceeds that of a human being. Noh-Var can lift 25 tons.

Superhuman Speed: He is very fast; his top speed is at around 150mph exceeding most conventional vehicles and enables him to walk up walls defying gravity.

Superhuman Agility: Noh-Varr's agility, balance, and bodily coordination are all enhanced to levels that are beyond the natural physical limits of the finest human athlete. This, coupled with his speed and reflexes, allowed him to outmaneuver Oubliette while riding her bullet bike.

Superhuman Durability: Noh-Varr has a triple jointed musculature structure, which is much more durable than that of an average human being or Kree; he is capable of withstanding injuries of all types and impacts that would kill both of either race.

Superhuman Stamina: He is capable of running at peak capacity for an undefined period of time.

Nanobot Injection: Noh-Varr was injected by the Kree with nanobots in his bloodstream enabling him to reroute pain sensations. His saliva triggers hallucinations to anyone that it comes into contact with.

Mental Control Over Body: He can control his body's growth, and adrenaline bursts enabling him to grow or solidify his hair at will and enter a "White Run" mode to where he is capable of ignoring any distractions while moving at his fastest doing whatever means necessary to accomplish his goals.

Wall-Crawling: He has insect DNA infused into his body, so can walk on walls and ceilings with ease.

Super hearing: He also has a layer of tympanic membrane covering his skin, allowing to pick up sound more effectively.

Grenade and poisonous nails: Due to the nano technology in his system and the genetic augmentations he underwent, Noh-Varr can extend his fingernails singly or all digits into razor sharp bombs with enough explosive force. A single nail can shatter thick skinned adversaries as well as damage the surrounding environment.

Skilled Combatant: Noh-Varr is very skilled in armed and unarmed combat utilizing extreme athletics and limited gymnastics. He is capable of fending off multiple opponents at once.

Skilled Marksman: He is an excellent sharpshooter.

Skilled Pilot: He can pilot all types of "Kree" designed aircrafts.

Transportation: The Marvel: A ship equipped with Kirby engines and the Plex omnichronal bio computer system, allowing to travel and navigate across the vast infinity of the Universe. Internal defenses include the Helicoptera; insectoid shaped mini-bots with knife edged propeller like wings that could fly at incredible speeds eviscerating anything in their path.
Weapons:

Retrieved from "https://marvelcomicsfanon.fandom.com/wiki/Noh-Varr_(Earth-1010)?oldid=256337"
Community content is available under CC-BY-SA unless otherwise noted.