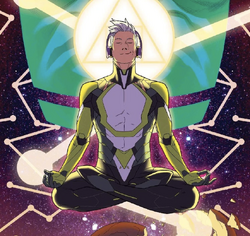 The Kree may be awful, but they've created something truly beautiful here. I just wish more of them could see it.

Noh-Varr was a technician in the Kree Military, because his genius level intellect allowed him to make breakthroughs never before seen by the Empire. However, the more involved in the military he became, the more uncomfortable he grew with how oppressive and violent the Kree were.

During one of his missions on Earth, he uncovered the truth about the Inhumans, and how they were disowned by the Kree. Noh-Varr, however, was fascinated by them, and reached out to the Royal Family on Attilan.

He was initially imprisoned in the Dungeons simply for being Kree, but after convincing King Black Bolt he wanted to help them, he was released and allowed to join the Royal Guard, where he befriended the Inhumans and finally felt like he had a family.

He would later accompany them on their mission to Hala after the Kree Empire ordered extinction of the Inhumans. He helped them in the battle, but was devastated when Black Bolt was killed by his brother, Vox, but not before destabilizing the internal structure of the planet. Noh-Varr then decided to join Mar-Vell in helping to rebuild the Kree Empire in a better light.

However, he would eventually return to Earth. He had developed feelings for an Inhuman there, Quake, an Agent of S.H.I.E.L.D. and an envoy to the Royal Family. The two decided to give a relationship a try, but quickly got upended by the arrival of the ancient Inhuman Hive, who was worshiped by Hydra. Quake would end up succumbing to his sway and joining his cadre of Inhumans, forcing Noh-Varr to align himself with S.H.I.E.L.D. to help save her. She was eventually freed from Hive's control, but was being eaten alive by guilt, and willing to do whatever she could to defeat him.

This led to a final confrontation with Hive, who was attempting to initiate his plan to turn all humans into Inhumans so that he could rule the world. Quake became determined to sacrifice herself in order to stop Hive, which Noh-Varr was unwilling to let happen. He ended up taking a grenade to his side during the battle, and tried to distract Quake long enough for him to take her place. He was able to rewire the Quinjet to disable the autopilot, and trapped himself inside with Hive, jetting them out of the Earth's atmosphere. In their final moments, Noh-Varr and Hive had a conversation, debating the paradoxes of humanity, before the Quinjet exploded, claiming both of their lives.

[[Category: In a Relationship with Daisy Johnson Characters]]
Retrieved from "https://marvelcomicsfanon.fandom.com/wiki/Noh-Varr_(Earth-101)?oldid=250286"
Community content is available under CC-BY-SA unless otherwise noted.