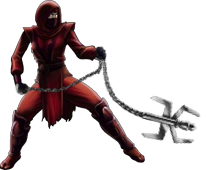 Nobu acted as a representative for a mysterious Japanese organization to Kingpin's criminal cartel. In exchange for his organization's investments, he requested a block of Hell's Kitchen and Fisk's assistance in transporting his special items and weapons from Japan. However, although his organization took an equal share of the profits, Leland Owlsley was unsure of what Nobu and his organization actually contributed. To ensure Wilson Fisk's continued work in their interests, Nobu would often remind Fisk of the threat that his organisation posed to his criminal empire.

One night, Nobu waited at the top of a building along with Madame Gao, Leland Owlsley, Anatoly Ranskahov and Vladimir Ranskahov awaiting the arrival of Wilson Fisk to discuss recent events. Owlsley commented on the fact that Gao did not speak English; when he asked Nobu if he could translate for her, Nobu was greatly insulted as he was Japanese and Gao was speaking Chinese. Nobu became more annoyed when Fisk's assistant/translator James Wesley arrived in Fisk's place. The group discussed the recent attacks that had occurred involving a masked man stealing from the Ranskahov brothers.

Remember your promise to me and those I work for.

Nobu was summoned for another meeting; this time without the Ranskahov brothers. They met at a car shop where Leland Owlsley commented on the car which was being cleaned of blood and brains. Eventually Wilson Fisk arrived with James Wesley; he announced that the Ranskahovs were no longer a part of their organization as Fisk had murdered Anatoly Ranskahov. Nobu and the others were shocked and angered at the news, claiming they should have been consulted. It was however agreed that they would continue their work with the money being split equally between the four of them. As the group departed, Nobu reminded Fisk of the promises he had made to Nobu and the people he represented.

What happened to the Russians, we need to be careful, all of us. I look out for you, you look out for me, all I'm saying."
"Each man must stand for himself, or fall with the unworthy.

Nobu organized the delivery from Japan to New York City of a child referred to as a "Black Sky". He arranged for Fisk to bribe the police to stay away from the docks, before the delivery, Nobu met with Leland Owlsley to ensure everything was running smoothly, Owlsley revealed that he knew what was happening and they should help each other out considering what had happened with the Russians. Nobu however told Owlsley that men have to stand alone before leaving.

Nobu and his team of armed guards were later present for the arrival of Black Sky. However as the container was opened and Nobu's men began unchaining the boy and moving Black Sky away, they were attacked by Daredevil and Stick who intercepted the delivery. An arrow was fired and seemingly deflected out of the path of Black Sky, leading to a gun fight between Nobu's men and the attackers, with Nobu ordering his men to kill them. In the chaos Nobu was able to drive away with Black Sky, but they were later attacked again by Stick who killed the boy by stabbing him in the heart before escaping.

Nobu blamed Wilson Fisk for the failure and called for a meeting. Nobu met with Fisk and James Wesley, who acted as translator, to discuss the events, Nobu insulted Fisk's possession as he claimed Fisk had not met with his guarantee for the safety of Black Sky, but Fisk pointed out that he had fulfilled his obligations, which was to ensure that they police did not interfere with the transaction. When Nobu informed Fisk of how difficult it would be to find another Black Sky, Fisk insulted him by saying that it was his fault for not explaining the situation. Nobu asked if he wished to renegotiate the terms of their contract, leading to Fisk apologizing, Nobu then left after threatening Fisk.

I am bound by certain requirements, even I have those I must answer to. After the setback at the docks, I can afford no further disruptions; do what you must, but do it quickly.

Nobu became impatient when Nelson and Murdock delayed the eviction of all tenants of a particular building in Hell's Kitchen. Nobu stormed into a meeting between Wilson Fisk and James Wesley; when one of Fisk's guards named Francis attempted to stop him and make him wait, Nobu twisted his wrist causing Francis considerable pain.

Fisk allowed Nobu to enter and he demanded that the building be delivered. Fisk offered other buildings, but Nobu insisted on the agreed building, noting that the people he represented would not accept such a change in plan. Fisk suggested that Nobu provide a warrior to eliminate the masked man in exchange for Fisk expediting evictions, knowing that Nobu's pride would make him fight the masked man himself. This was a ploy by Fisk, who later admitted that he had decided to eliminate Nobu, and that "in a perfect world", Daredevil and Nobu would have killed each other.

You are a worthy opponent. It is an honor to claim your life.

--Nobu to the masked man

Wilson Fisk killed one of the problematic tenants, Elena Cardenas, and then made an impromptu televised statement which subtly taunted Daredevil over his inability to protect her. Knowing that the devil would seek out the people responsible, Fisk then allowed Daredevil to "discover" his whereabouts. When Daredevil followed this trail, he instead found Nobu in a warehouse, dressed in his Hand uniform. Nobu was able to slow his heartbeat, ensuring that the attack was a surprise to the masked man.

Nobu attacked and nearly killed the masked man using a shoge hook, slicing the masked man's skin and stabbing him in the side. At one stage the masked man was able to rip Nobu's mask from his face; Nobu told him that he was a worthy opponent and it would be an honor to take his life. Before Nobu could kill him, the masked man pulled the blade from his side and knocked Nobu into a barrel of fuel. He then used a stick to destroy a light causing electrical sparks to ignite the fuel, burning Nobu to death. Later, when Wilson Fisk and James Wesley arrived and saw the flames, Fisk told Wesley to let Yoshioka burn.

Recovered from his wounds, Nobu continued to direct the Hand's activities in New York City. After unearthing some kind of sarcophagus as well as abducting, and brain washing victims to provide blood to it. He arrives to stop Daredevil from taking the sarcophagus, and has Stick kidnapped to interrogate.

When Daredevil arrives to rescue Stick, Elektra follows, hoping to kill Stick for revenge. Nobu confronts the three, revealing Elektra to be Black Sky, the one who would lead the Hand. Daredevil convinces her to turn from her "destiny" and she instead aids in rescuing Stick.

After the three escape, Nobu realizes that if Black Sky is to join them, they have to eliminate Daredevil. He provides a list of names of twenty people Daredevil had rescued and had them abducted to lure Daredevil into a trap.

He orders his men to finish Daredevil, but the Punisher snipes the remaining Hand agents while Daredevil intercepts Nobu, and after a final brawl, Daredevil throws Nobu off the building.

Master Martial Artist: Nobu was an extremely skilled combatant, with an extensive martial arts knowledge, which enabled him to overpower and almost kill Daredevil in their intense duel, with a combination of superior combat skill and his formidable shoge hook.

Master Acrobat: Nobu incorporated gymnastics and acrobatics into his fighting style, and was notably able to outmaneuver the very agile Daredevil, easily dodging and countering most of the latter's blows, and swiftly gaining the upper hand in their duel as a result.

Retrieved from "https://marvelcomicsfanon.fandom.com/wiki/Nobu_Yoshioka_(Earth-1010)?oldid=198702"
Community content is available under CC-BY-SA unless otherwise noted.