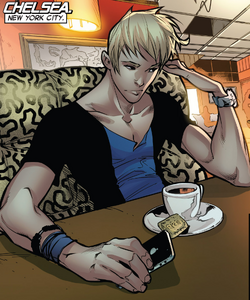 First appearance
Perks of Being a Wallflower

Noam met Victor Borkowski online. They started chatting and were both into each other. Noam knew Victor was a mutant but never saw a picture of him. He still agreed to go on a date with him but Victor never showed up, because he was afraid of Noam's reaction to his appearance.

Later, Victor found Noam sitting at the Washington Square Park and finally revealed himself to him. He asked Noam if he still wanted to date him and Noam didn't hesitate at all. He said he will take him to the next coffee shop and held Victor's hand while they walked side by side.

Retrieved from "https://marvelcomicsfanon.fandom.com/wiki/Noam_(Earth-1010)?oldid=148275"
Community content is available under CC-BY-SA unless otherwise noted.