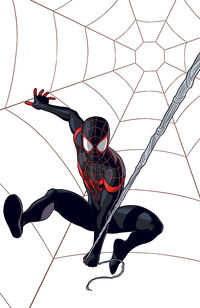 Noah was born to highly respected S.H.I.E.L.D agents Jason and Ashley Kaden In 1999. In 2004, his parents were sent on a special mission but were killed by OsCorp agent Aaron Davis, leaving Noah orphaned and no history of his parents' past. He was adopted by his childhood friend Alice White's father Jeff who was also a S.H.I.E.L.D agent but resigned after his friend Jason and Ashley's death, he then became a cop. Later on Aaron Davis is assigned to keep an eye on Noah.

Growing up, Noah and Alice became inseparable and Noah falls in love with her but Alice does not notice it.

Shortly after beginning sophomore year of high school. Alice began dating a boy named Yousif, who would constantly terrorize Noah behind Alice's back. He did not grass Yousif out as Noah loved Alice too much to get hurt.

In September, 2014. Noah's science class were handing out letters for an OsCorp field trip. Noah not being interested didn't want to go but was forced to by the science department, so he went. OsCorp were demonstrating fusion, similar to what Peter Parker had attended 13-years earlier. A genetically engineered spider created by OsCorp hid in Noah's clothes and was waiting for a chance to bite him.

On the bus ride home, Noah was bitten by OsCorp's spider and has a seizure on the floor.

He woke up 30 minutes later at the school on the bus with everyone standing around him with people taking photos, videos, asking him if he was okay. He got up, feeling embarrassed and fled the scene. Noah goes home and sees Jeff and tells him of what happened. Jeff knowing of the origins of the spider pretends to play dumb. Noah goes to his room and goes to sleep.

The next day, hoping everyone had forgotten of his embarrassment he goes back to school. While eating lunch he sees his tray has stuck to his hand, he attempts to get this off and succeeds but accidentally hits Yousif. Yousif challenges Noah to a fight after school publicly in front of everyone, Noah defending his honor accepts the challenge.

After school, he meets Yousif fearing he's going to get annihilated. They fight but by instinct Noah dodges the attacks and blocks a punch from Yousif breaking Yousif's hand. With the attention on Noah once again, he runs away.

On his own and at peace, Noah pieces together what has been happening and realizes it was the spider that gave him powers and he has gained similar powers to his idol Spider-Man, he cheers that his dream has finally come true but he needs advice from none other than Spider-Man.

The next day, Noah heads to Parker Industries and makes an appointment to meet up with Peter Parker. Peter accepts this and sends Noah in. Noah asks Peter if he could get into contact with Spider-Man seeing as he has something urgent to tell him. Peter shrugs this off and sends Noah away, Noah pleads with Peter, Peter seeing the sincerity in Noah agrees to 'get in contact' with Spider-Man.

Later on, Noah is sitting on a building overlooking the city. His Spider-Sense warns him of a potential danger but he sees Spider-Man has arrived. Noah geeks out but Spider-Man tells Noah to stay focused. Noah tells Spider-Man of his encounter with the spider from OsCorp and his acquisition of spider-powers and asks for advice. Spider-Man tells Noah of the motto: "With great power, there must also come great responsibility" and Spider-Man swings away. Noah heeds these words, dons himself a costume and becomes Arachnid-Man.

After his first day as Arachnid-Man, Spider-Man follows Noah to his home and gives Noah his old webshooters as a 'welcoming' gift into the Spider-Family. Noah can not be any happier knowing that his dreams have come true.

Encounter with the Redback

While on patrol, Arachnid-Man is attacked by Aaron's persona the Redback. The two battle and Arachnid-Man asks who he is but Redback replies with "I know your past" before leaping away.

The next day, Alice reveals that she has broken up with Yousif. Jeff encourages Noah to confess to Alice which he does and the two get together.

Later on, Arachnid-Man is attacked again by Redback and he finally reveals his past to him. Redback tells Arachnid-Man his parents were S.H.I.E.L.D agents and were killed by him (Redback), he also reveals that Jeff is also an ex-S.H.I.E.L.D agent and for the final revelation he tells Arachnid-Man the spiders were created to make a Spider-Army and Noah was only a prototype not some special chosen one, after this Redback leaps away once more. Noah returns home distraught and demands answers, revealing his identity to Jeff. Jeff tells Noah the truth and Noah breaks down in tears but he is also happy knowing he is at peace with his past.

Arachnid-Man and Spider-Man meet on a rooftop and discuss recent events. Spider-Man tells Arachnid-Man he'll keep an eye out and will help in any way he can.

The next day at school, Redback attacks and the school is evacuated. Noah stays and puts the Arachnid-Man suit on and battles Redback. Redback escapes and leads Arachnid-Man to the place where his parents died: on the OsCorp skyscraper. They battle and Redback accidentally commits suicide, with destroyed webshooters Arachnid-Man is forced to jump off the crumbling building but is rescued by Spider-Man. The two arrive on a building and feeling he can trust Noah, Spider-Man reveals his identity to Noah as Peter Parker. The two overlook at the damage Noah and Redback caused and the two agree on some superhero training.

Arachnid-Man arrives at a hideout and meets all the Spider-Men and Women. Suddenly they discover another Spider-Team and the two teams begin arguing. With his more advanced Spider-Sense, Arachnid-Man tries to get their attention but is ignored and the whole group is attacked by Daemos. The Spiders manage to kill Daemos but he clones himself and brings more Inheritors with him. The Spiders retreat. While the adult Spiders are discussing things, Arachnid-Man meets Miles Morales of Earth-1610 and Peter Parker of Earth-3998. Suddenly they discover Silk has left and they scatter the important Spiders including Arachnid-Man. Arachnid-Man, Miles Morales and Peter Parker (Earth-3998) leave to protect Arachnid-Man and are all supervised by Peter Parker of Earth-1315.

Noah, Miles, Young Peter (Earth-3998) and Old Peter (Earth-1315) enter a futuristic universe and learn they are in the year 2280. Noah wonders what to do now but suddenly they are attacked by an Inheritor; Daemous. The two Peters stall Daemos while Noah and Miles escape through another portal. The two Peters are easily defeated by Daemos, as Daemos is about to kill Peter (Earth-3998), Peter (Earth-1315) tackles Daemos and orders Peter to escape, he does so and the Old Peter follows with the portal closing behind them. They have now entered the Earth-1315 universe, Old Peter takes the lead as this is home dimension. They go into hiding to hopefully stay low from the Inheritors. They relax and converse for a good five hours but this is ended when Morlun emerges and attacks the Spiders, Miles and Noah agree to stay this time and fight Morlun the four Spiders fight him but are easily knocked out. Old Peter knows they won't win but as a way to stall he attacks Morlun and tells the three younger Spiders to run. Old Peter has his head smashed in by Morlun and is knocked unconscious, Morlun absorbs Old Peter's energy ending his life. The trio are now alone...

Spider Physiology: Arachnid-Man's hands and feet have the ability to manipulate the inter-atomic binding forces of matter, allowing him to form temporary molecular bonds between his body and another object. This enables him to cling to solid surfaces and scale walls simply by placing his hands on them. He also possesses a "spider-sense" which alerts him to danger. This takes the form of a tingling sensation at the base of his skull. Through experience, Arachnid-Man has learned how to sense differences in the various tingles he feels, determining whether a danger is potential or immediate, how intense a threat it is, what direction it is coming from, etc.

Genius Intelligence - Spider-Man's DNA effected Noah's intelligence remarkably and Noah is now a prodigy bio-chemist. He possesses an IQ of 150.

Although Arachnid-Man has not fully grown to adulthood, he is as strong as his Spider-Man or more, however he is portrayed as being sufficiently strong enough to lift and throw conventional vehicles and cars, it should also be noted that he has been shown to be significantly stronger than Captain America. Arachnid-Man is currently capable of lifting 10-12 tons. However, when Noah reaches adulthood it would be assumed that he would be able to lift 12-30 tons unlike Spider-Man.

Equipment: Mechanical Webshooters - As a gift from Spider-Man, Arachnid-Man possesses wrist-mounted web-shooters discharge thin strands of web-fluid at high pressure. On contact with air, the long-chain polymer from the web-shooters knits and forms an extremely tough but flexible fiber with extraordinary adhesive qualities.
Transportation: Arachnid-Man moves through locations by shooting a web-line and attaching it to an object (most often a building). He then swings, shoots another web-line, attaches it, and repeats the process.
Weapons: Arachnid-Man's webs can be used to ensnare and immobilize his opponents in combat.