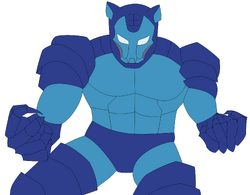 I need to help people...

Noah Gramps was born in Honolulu to Hank and Jocelyne Gramps. However, he was born with a hole in his heart. He was quickly operated on with Tiger Serum in order to regenerate his heart.

Years passed, and Noah seemed to be bright at school, more so in science and in physical education, than in literature. He skipped the 1st grade and began elementary school in the 2nd grade. This year he met Elizabeth Kelekolio and Edward Marshall, and they became a classic best friend trio. In primary school he was bullied frequently due to his young age and above-average intelligence. Because of that, his parents decided to move to West Virginia, where the rest of his family lived. In 4th grade, Liza promised to marry Noah when he'll come back from West Virginia, years later. Nonetheless, he tried, unsuccessfully, to date with girls in West Virginia, as he considers it as a cheat.

In 8th grade, he fought Kevin Brown, but won easily because of his powers. He regretted using his powers selfishly and violently, and swore to fight for good from then on.

After school, every time a crime was committed, he fought the culprit or prevented the crime from being committed, using his powers and a Tiger Suit to avoid being recognized and targeted. He noticed later that his acts were very similar to Spider-Man, who is his idol.

In the summer holidays of year 2015, he goes alone on a trip to New York City. There, he found the villain Ghost trying to kill people, and fought him. He won with however lots of difficulties. Spider-Man and Iron Man were on their way, but when they arrived, they found a knocked out Ghost with broken armor, and a bleeding Noah. When they tried to heal him, minutes later in the Avengers HQ, Noah already didn't have any bruises left, due to his enhanced regeneration. Afterwards, he asked if one of them could be his mentor. Tony replied with a cold no, and Peter was absolutely okay with it.

Noah's first test was to eliminate wild animals, in order to get him used to fighting wild-looking villains, as Spidey fights usually. Peter found Noah should be a superhero, even if he's only 12, even younger than he was when he began to act as Spider-Man. His second test was to fight each Avenger who are disavantaged in certain ways, to not make the training impossible.

Two months passed with Noah training. Tony finally gave him a new suit, the Osmium Tiger Suit, and Peter warned him that his training should be secret as well as his identity. Noah thanked the Avengers and promised that he will train more and become an Avenger when reaching adulthood.

Most of Noah's powers are due to the Tiger Serum that had been injected in his blood after his birth. The first purpose of the Tiger Serum was to give him regeneration abilities, but in fact, it added other powers because the Tiger Serum contained hidden genes that doctors couldn't have detect.

One day i swore to myself to always do good. I thought that I was the only one who did that. I was terribly wrong...

Noah is very appreciated from his family and near friends by the great goodnesses that he represents. Respected by most of people he meets, his opponents and sometimes even his enemies never get late to rate him at his true worth, as moral as strong. Noah always dreamt to become a honorable father since his teenage. As well being charismatic, he's also generous, kind and altruist, goodnesses that he'll never abandon, at any price. Confident, he never notices when he gets involved into something dangerous, within fights against powerful enemies.

Noah is unsuccessful with girls, however he seduced the heart of Elizabeth Kelekolio and even linked their souls.

Retrieved from "https://marvelcomicsfanon.fandom.com/wiki/Noah_Gramps_(Earth-9048)?oldid=249983"
Community content is available under CC-BY-SA unless otherwise noted.