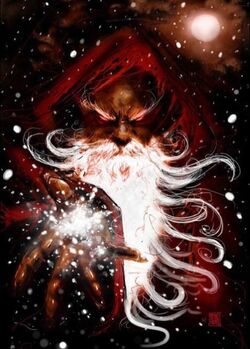 They became part of the long-time war during the attempt of diminishing the Celestials from existence and attempting to steal the six cosmic energies stored in each singularity that was kept by the Celestials known as "The Great Multiversal Rebellion," they were unexpectedly and immediately were all defeated single-handedly by the creator himself and all of the Beyonders have tried to steal the cosmic energies stored in each singularity. But instead of successfully obtaining their cosmic powers, The six singularities formed and merged into a massive singularity, leading to a Big Bang of a new reality, the creation of the reality that would be later known as Earth-61615. Due to their attempt at neutralizing the Celestials, all of the Beyonders were banished from their realm, sending them into the vastness of nothingness of this new universe that they'd unexpectedly created. It was later revealed that have crashed in a rogue planet in this new universe that they've created.

After experiencing enough from his superior comrades who was leading the Beyonder mutiny, he decided not to join their crusade against the Celestials and still, he manages to convince several of his fellow comrades to leave their unnecessary, an pointless movement. Before going their separate ways, the Beyonder superiors interrupted the Wonder Worker and the rest of them and seemingly "gave their farewells" to each other before the superiors lunges at them, draining all of their powers and transferring it into their own systems. Miraculously, he was the only one who survives after all of his powers were drained but the Worker was still weak, while the rest of his comrades unfortunately disintegrates after being drained.

Shocked that the Wonder Worker is still alive, one of the superiors extremely used his powers on him, blasting him with his mysterious and powerful cosmic energy,, causing for him to vanish into thin air, seemingly disintegrating and killing him, though in actually he was transported due to the warp speed caused by the blast, delivering him into a realm called Midgard, or more commonly known by many as Earth.

Due to his Beyonder physiology, the Wonder Worker was staying alive on Earth for thousands of millennia, still struggling to accept the fact that all of his fellow friends and allies were dead, and all of it was because of him. Regretful for all of the actions that got his comrades killed, the Wonder Worker decided to never again, use his powers for any use whatsoever, either if it is for good or evil purposes, the Wonder Worker will always remain neutral, in this world he was now stranded in. Powerless, he had no other choice but to start over again and live a new fresh start on Earth, on whatever resources he can possibly find in this alienated realm.

The Wonder Worker had lived on Earth for thousands of millennia, witnessing the early days of the human civilization rising, to the establishment of Colonial Empires throughout Europe. There, he met several known iconic individuals such as the Western and Eastern Philosophers (from Aristotle to Confucius), the peculiar founders of the Hand (Gorgon and the five mysterious fingers), the founders and leaders of the Roman Empire (from Julius Caesar, Augustus to Constantine the XI Palaiologos), the Religious Founders and Leaders (from Gautama Buddha to Jesus Christ), and so much more individuals throughout history, making the Wonder Worker a living time-traveler in a sense, and learned the many different concepts of human beliefs and principles from time to time.

At some point during the year of 25 to 30 AD, the Wonder Worker had lived five years of his life in the Middle East, most specifically inside the city of Jerusalem, Judea under the rule of the Roman Empire. Throughout the years living as a Jewish carpenter, he met and became good friends and confidante with the iconic Jesus Christ of Nazareth and His Twelve Disciples. Due to the Wonder Worker's senses, it was later revealed that Christ was not just a normal human being, but in fact, He was some kind of a mysterious being with a peculiar and strange origin, who was higher heavenly being than any cosmic embodiment or Celestial, and later claimed Himself to be the begotten "Son of God," which was later proven to be in fact, true.

Christ's later death had also devastated the Wonder Worker, for he has lost a great friend who was the only being closest to his kind and race, not until days later when Christ's tomb went suddenly empty. Jesus had risen from the dead. He then visited his disciples, to tell them to spread the word of God throughout the world before ascending to Heaven, which began Christianity. The Wonder Worker didn't witness the resurrection of Christ and saw Him one last time, although it made him believe more through faith that things will eventually get better and better each and every day on Earth, not only to himself but also for the rest of humanity.

During the early days of the year 273, the Wonder Worker managed to find his way on the Anatolian Peninsula, most specifically the city of Patara an later, the town of Myra, Lycia, which is part of the geographical area that was known by then as Asia Minor. Since then, he started living his newly-established life as a normal man and a professionally-skilled blacksmith, now going by the name of Dekémbrios Nikolaos of Myra, among to those following individuals who had met him throughout his years of living on Earth. Surprisingly, Nikolai somehow started devoting his life into Christianity after the death of Christ, which heavily influenced Nikolaos, and became a recognized Christian saint, and later, a Greek Bishop of Myra. His reputation had evolved among the faithful, as was common for early Christian saints, and his legendary habit of secret gift-giving gave rise to the traditional model of Santa Claus through Sinterklaas.