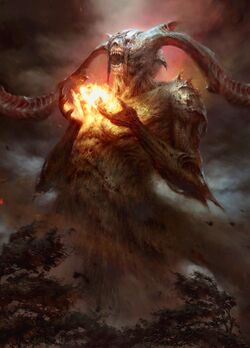 Nightmare was a terrifying and horrifying demonic entity with a mysterious origin, who became the powerful ruler of the dream dimension and a powerful entity in the prime universe. For countless billions of years, since the beginning of time itself, Nightmare took over the several dimensions, in which he would make it a part of his own as he conquer it, and grew increasingly in power with every Nightmare he cast into a mortal mind. Without knowing, Nightmare soon became dependent on the fear he caused, making him even more power than he was, and soon after he required fear to live.

Eventually, when Nightmare began to lose his power due to the lack of fear he was able to maintain in his dimension, Nightmare physically ventured into the human realm on Earth, which was still during the Stone Age, when humanity was still rising into spreading civilization throughout the rest of the world. Once there, Nightmare took on the form of a ordinary farmer and a fortune teller, living inside a simple hut, and eventually have taken control of a rural, lakeshore village.

The entire village was used as a tool for him in order to draw the residents of the village who were seeking a thrill, as Nightmare would show them their greatest fear for a price. Little did the thrill-seekers know that their fear was feeding Nightmare, increasing his power overtime. However, all of that changes, after one of its oldest residents, Agamotto, dubbed the Sorcerer Supreme, was revealed to be a vastly powerful benevolent being, who was also leading an organization of sorcerers committed to protecting the Earth from mystical threats, known as the Masters of Mystic Arts.

After an epic and devastating battle between the powerful demon and the sorcerers, Nightmare was finally defeated, and with it, he was sealed away into a sacred container only the Sorcerer Supreme itself could open, which, in turn, were placed inside an ancient tomb located at the burials of the village, where it was later found by the present day Sorcerer Supreme, the Ancient One, who then placed the container inside the scared relic room, inside the Masters of the Mystic Arts current headquarters, Kamar Taj. There, Nightmare remained imprisoned inside the container for several millennia, where he was imprisoned for a very long time, where it seemed like an endless torment for Nightmare, slowly draining from the lack of consuming fear.

A few years later, when the Infinity Gauntlet was now in the possession of the Mad Titan, Thanos, he announced his presence to the universe once more, in an attempt to impress and please his love for Lady Death, he decided to wipe out half the life in the entire universe with a snap of his fingers. However, despite having to remain imprisoned from his own container, the reality-altering effects of Thanos' snap somehow manages breaking the container, giving Nightmare the ultimate chance for him to escape his seemingly endless, agonizing captivity.

But little did Nightmare realize, that once he got out of the container, Nightmare's essence started rotting as he tries and change his own form. Unbeknownst to him, another eerie, parasitic entity from across the multiverse, has merged with Nightmare's body which caused his own body to deteriorate in the process. As he flies back into his own dimension, which was abandoned for almost a thousand millennia, Nightmare never stopped on decaying, despite the fact that he has returned to his safe haven, outside the human realm. However, despite his efforts and strength to fight off the effects of the Infinity Gauntlet, he miserably failed, apparently killing Nightmare in a really painful way.

Nevertheless, the contrary happened to Nightmare, and instead of the effects killing him quickly, it slowly turned him to undergo into a mysterious and strange process, to which, he and his entire realm, for that matter, was slowly wrapped into some kind of a "cosmic cocoon," where he was contained inside of it, for no one knows how long. From that point on forward, Nightmare remained in suspended animation, without anyone or anything, finding out about his whereabouts. Somewhere in the vast multiverse, Nightmare himself, was lost in it.

At some point later on, Nightmare would eventually snap out of his catatonic state, and as he wakes up entrapped inside the cosmic cocoon, he struggles to break out of it. However, after using all his remaining strength and capacity inside him, Nightmare manages to rip it apart from the inside, and was finally able to get rid off it. Escaping his own cocoon, he watches in terror and yet, amazement, as he finds out that his own realm has gone through the same process, turning the Nightmare's Realm into a more, hellish-looking, deathly dimension, with having no possibility and chance for the reemergence life, only but Nightmare himself. In the wake of Nightmare's return, he was revealed to wake up as a new-created and a lot more powerful entity, due to the result of the parasite and himself merging inside the cosmic cocoon. Nightmare also found himself reawakening in a new reality, which was accidentally created during the earth-shattering events of Infinity War caused by Thanos.

Feeling a lot more powerful now that he had merged with the mysterious parasite, Nightmare also felt more tendency and craving for hunger in his new form, hunger for devouring worlds, in order to convert it into his own realm. As a result, Nightmare started his cosmic pilgrimage throughout this new universe he reawakened from, conquering every fear he could find from the weak and the wicked ones.

Retrieved from "https://marvelcomicsfanon.fandom.com/wiki/Nightmare_(Earth-61615)?oldid=255938"
Community content is available under CC-BY-SA unless otherwise noted.