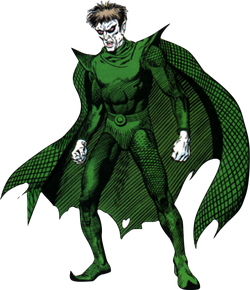 Mortal fools! I am the Master of the Subconscious, the Midnight Leviathan -- proof positive that the most precious of dreams too often fall prey to...Nightmare!

Nightmare controlled one of the Splinter Realms known as the Nightmare Realm and the Dream Dimension. Nightmare was fiercely protective of his realm, having warded off attacks from his daughter and other demons seeking to depose him. Nightmare acted as a servant of Shuma-Gorath.

Young Peter Parker was fishing with his Uncle Ben, and they are attacked by monsters. This was revealed to have been a nightmare. Later, as Peter has just begun to fall asleep again the super villain Nightmare appeared and decides to feast on the young boy's dreams... and Stan Lee knocked him out with a tennis racket to the head.

In the modern age of heroes one of his first conflicts was with Doctor Strange. They battled when Nightmare haunted the dreams of a corrupt businessman. When Dr. Strange entered his dreams, Nightmare attempted to trap him there, leaving his physical body undefended while the man, afraid that the secret of his crimes had been found out, would try to kill Strange. Strange managed to escape Nightmare's dimension with the help of the Ancient One.

Seeking to conquer our dimension, he began trapping people in their dreams in hope of gaining information on how to defeat Dr. Strange and his master, the Ancient One. His plan was foiled by Strange, who freed the captives and escaped Nightmare's dimension. They clashed again many times, but each time Nightmare was defeated.

Nightmare is a Class Three Demon who is able to capture a sleeping person's astral form and bring it to his realm. There they are tormented in various ways as he chooses.

Nightmare can summon a number of lower beings in his realm such as succubi to do his bidding.

Nightmare can summon his mount, Dreamstalker when needed.

Under normal conditions, Nightmare cannot affect an individual who is awake. However, his images and other creations can continue to haunt a person in their waking hours.

Nightmare has been shown capable of simultaneously subduing two Earth demigods, an Eternal, an Elder God, and a genius-level human teenager with ease through magic while assessing their worst fears from the darkest crevices of their minds, though is actually capable of sustaining reasonable physical harm with one strike from Hercules. His existence and vast knowledge is known to the Council of Godheads.

As long as there are beings that dream, Nightmare will exist. While he has been defeated, he can never truly be destroyed.

Nightmare is much weaker when outside of his realm, and can be overcome while in it by a being who has completely conquered their fear.

Equipment: None known.
Transportation: Dreamstalker
Weapons: Nightmare's wand is capable of generating a maze which is nearly impossible to escape

Retrieved from "https://marvelcomicsfanon.fandom.com/wiki/Nightmare_(Earth-1010)?oldid=255940"
Community content is available under CC-BY-SA unless otherwise noted.