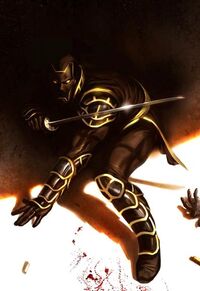 Earth-616
Base Of Operations
Mobile across US
Characteristics
Gender

Red Ronin is the alter ego of Nicolas Alomar, a wealthy young man who was driven to fight crime after his parents; Eric and Mila Alomar were viciously murdered by anti-mutant activists. He turned his father's investments into a thriving corporation. He then used his wealth to purchase an armored costume and an arsenal of weapons that he would use to fight those who preyed on mutants. Alomar named his costumed identity Red Ronin, as a nod to the costume and to his Russian mother.

After receiving the training and eqquipment needed, Nick returned to Philadelphia to learn that his parents' murder had never been solved. An investigation was never pended because the criminals were working high up in the government and had amnesty for their activist careers. Nick knew the truth and he wanted to make sure everyone else did to. As Red Ronin, he broke into the local police station and had a meeting with the Commissioner, to discuss the matter of the murder. The man seemed to understand, but was terrified at what Ronin might do. When he tried to call for back-up, Ronin had left, determined to do the Commissioner's job the right way. Ronin scaled rooftops and stalked the alley where his parents died, hoping to find the activists on the prowl once more.

Though they never showed, he did find a mutant cornered by people with weapons. Ronin jumped down from his perch behind the group and waited until one turned. Frightened, the man alerted the rest of his partners and they questioned why he was there. Ronin remained and prepared for the coming assault. The initial man ran at Ronin with a knife ready, only to be quickly taken down as he arrived.

The rest of the group was in shock, but still ready to defend their purpose. They all attacked Ronin at once who seemed at first overwhelmed, but it was apart of his plan. He defeated his attackers and turned to the mutant, signaling her to leave the area. Instead, she removed a piece of her flesh and threw it at Ronin, which subsequently exploded on impact.

He was caught off guard and wounded by the blast. Ronin tried to inform her of his intentions, but she prepared another kinetic projectile. He narrowly missed being hit as the flesh struck and destroyed a wall. As the smoke from the debris cleared, the woman fled and the police arrived. Ronin made his escape by climbing a fire escape, but the officers saw him. The chase began, with the police catching up as Ronin had lost a significant amount of blood. The rain continued to pour relentlessly on the chase, reducing visibility. Ronin used this opportunity to take cover and wait for the two officers to approach.

As they neared the nearby wall Ronin was behind, he struck his fist out, rendering the first officer unconscious. The second, took aim with his gun and fired blindly, hoping to hit Ronin. He succeed and blew out his kneecap. Ronin fell over, though he managed to launch a sleeping gas pellet in return, hitting his mark. Nick took off his mask and lay in the puddle of rain water and blood trying to force the pain away. He dragged himself to the edge of the rooftop, and fired a grapnel line into the floor. Nick rolled off the building and the line went taught before he hit the ground. While in the alleyway, he crawled behind a dumpster and hid the Ronin armor before passing out from blood loss.

He was discovered later and the paramedics assumed he was attacked and robbed by the fugitive mutant that had murdered someone earlier that night. She was the one that Nick had saved in his first outing as Red Ronin.

Nick was not pleased with himself in his first outing as the Red Ronin. He landed himself in the hospital for a month. If he wanted to avenge his parents deaths and protect people, he would need to become serious about his new career choice. Nick would have to become dedicated to a life of eradicating crime, if not, he would fail and most likely die in the process. In order to achieve this goal, he would have to learn to fight with proper technique to gain some discipline. Nick would also have to be educated in all the equipment he purchased, such as gaining maximum speed while wearing his armor, or properly wielding a katana.

He left the US and traveled the world to various locations where he could learn new techniques and hone his skills.

Skilled Detective: Alomar is a good detective with broad knowledge and understanding of the criminal underworld.

Interrogation Expert: He is an expert at interrogation often employing law-enforcement methods and torture.

Indomitable Will: He is a very strong willed person second to none. He is able to suppress all forms of temptation including physical, mental, and sexual.

Peak Human Conditioning: Nick possesses the peak athletic strength and endurance of a man who regularly engages in intensive physical exercise. His physical attributes exceed that of any Olympic level athlete that has ever competed. His strength, speed, stamina, and coordination are at peak human perfection.

Expert Acrobat: Alomar possesses exceptional human strength, endurance, and stamina. He is athletic, with very good reflexes and agility. This, combined with training as an aerialist and acrobat, makes him capable of complex acrobatic maneuvers.

Expert Fighter: Red Ronin is an excellent martial artist, having been trained in various forms. Athletic prowess and fighting ability are par excellence. His favored form of fighting incorporates Boxing, Judo, and Eskrima.

Multilingual: Nick is fluent in French, English, and Russian.

Alomar possesses the normal human strength of a man of his age, height, and build that engages in intensive regular exercise. He is strong enough to lift at least twice his bodyweight, meaning he is able to lift at least 480 lbs.

Possesses all of the weaknesses of a human male (sleep deprivation, fail on lack of air, food etc) though is able to resist them for far longer than average human levels.

Retrieved from "https://marvelcomicsfanon.fandom.com/wiki/Nicolas_Alomar_(Earth-616)?oldid=164305"
Community content is available under CC-BY-SA unless otherwise noted.