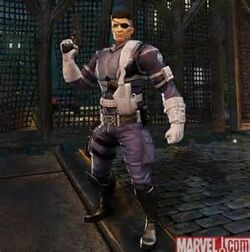 Little is known about Nick fury's life before the attack on the S.H.I.E.L.D. USS Alpha Helicarrier. It can be assumed to be similar to his mainstream counterpart.

Fury was on the Helicarrier UNN Alpha when it was attacked. He sent out an alert, bringing Spider-Man, Wolverine, Captain America, and Thor to the Helicarrier. He later formed a task force to take down the Masters of Evil, the Ultimate Alliance.

Fury was the leader of the group, sending them on missions and guiding them along the way. He was transported into space along with a group of the heroes by Uatu, and later returned to Earth to fight off many Doombots on his own, eventually sending the team to confront the evil Doctor once and for all. After Doom's defeat, he disbanded the team.

Fury discovered a terrorist plan by Latverian prime minister Lucia von Bardas to attack America. Because the government would not allow S.H.I.E.L.D. to attack Latveria, Fury assembled Captain America, Iron Man, Wolverine and Spider-Man into a secret team to stop Bardas. They were successful, but a year later, Von Bardas attacked New York anyway. After destroying some of the city, she was stopped by a team of super-heroes. The government found out about the unsanctioned attack on Latvaria and Fury went into self-exile.

Some time later, Fury rescues a small team of heroes who were severely injured during an attack on the Geffen-Myer Chemical Plant. Taking them back to a secret S.H.I.E.L.D. bunker, Fury heals the heroes and enlists their help in investigating the Pro-Reg Nanite network, which he believes to have been hijacked. Fury guides the team through an infiltration of the Ryker's Island Penitentiary, and after they gain the nanite network logs he and the Tinkerer inform the team of the Fold, a sentient entity born from the growing Nanite network. Fury teleports to Ryker's and enters the Negative Zone Prison 42 along with the team of heroes.

When the Nanite-controlled villains are released, Fury heads of to re-open the portal back to Earth while the heroes go to find a pure Nanite sample, which they hope to use to find a way to defeat The Fold. The majority of the Alliance make it to the portal and return to Ryker's, but Fury is waylayed and caught in the self-destruction of Prison 42 along with a number of heroes and villains.

The Alliance later discover that the Superhumans caught in the explosion were absorbed into The Fold, which has escaped the Negative Zone and has launched an invasion on Earth. Many teams and places are taken over, including the X-Men, Stark Tower, and many others. The Alliance goes to Wakanda to hold back the Fold and liberate Wakanda. While here, they learn that Fury was also taken over by The Fold. Fury offers to stop the attack on the Alliance if they willingly join The Fold, but they refuse and Fury sends an army of Fold warriors to attack the Wakandan Palace; including Green Goblin, Hobgoblin and Venom.

Realizing that most of their bases are compromised by Fury's knowledge, the Alliance move to Wakanda and form a plan to shut down the Fold using a stasis signal. They go to Iceland and head to the Fold's Repeater Tower to broadcast the signal. After battling through a slew of enemies and controlled heroes they make it to the top of the tower and broadcast the signal.

However before the Fold can be rounded up and disbanded, Nick Fury, heavily upgraded with stronger nanites, stops the signal and attacks the team of heroes using a variety of powers from Fold members. After an epic battle which destroys much of the top tower platform, Fury is defeated and the Fold is disbanded.

After being returned to health by Mr. Fantastic, Fury thanks Captain America and Iron Man for everything they've done against the Fold.

Retrieved from "https://marvelcomicsfanon.fandom.com/wiki/Nicholas_Fury_(Earth-6109.2)?oldid=256349"
Community content is available under CC-BY-SA unless otherwise noted.