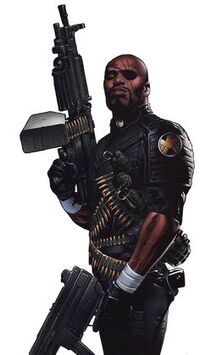 Fury was the son of the World War II veteran and former member of the Howling Commandos; Jack Fury.

Upon graduating university, Fury joined the a U.S. black ops team and rose through the ranks. In 1989, Fury took part in a mission that would change his life forever, Fury and his team encountered the mutant Sabretooth which resulted in Sabretooth scratching out his left eye.

When recovering in hospital, Fury was approached by Director Ross of S.H.I.E.L.D. and offered him a position their. Fury accepted the offer and joined. Over the years, Fury rose through the ranks and became Ross' second-in-command. When Ross stepped down as director, Fury was selected as his replacement. His first actions were to shut down Weapon X and resurrect the Super-Soldier program, commissioning Dr. Bruce Banner to try to recreate the formula that made Captain America. This failed and resulted in the creation of the Hulk when Banner injected his serum into himself and was exposed to gamma rays.

After the Mole Man Invasion and the Fantastic Four's reveal to the world and the ever growing population and potential threats of mutants and enhanced. Nick Fury used this as an opportunity to try and get his Team of enhanced off the ground, the U.S government approved of this and so Nick Fury created his team.

Nick Fury created a dossier of all of his candidates to join the team, Fury sent his top agent Natalia Romanova a.k.a the Black Widow to recruit them. Those individuals were; Tony Stark, Dr. Hank Pym, Janet Van Dyne, Dr. Bruce Banner and Thor.

Fury sent the team on their first mission, there had been disturbances in the Atlantic and were sent to investigate. The Team ended up discovering a frozen Captain America, Iron Man alerted Nick Fury and he immediately told them to bring him back to America in the Quinjet.

When Rogers was thawed out and awakened, he panicked and attacked Nick Fury and some S.H.I.E.L.D. agents believing them to be Hydra agents and still in the year 1944. Eventually entering outside he saw that the world had advanced and realized years had passed since being frozen, Fury informed him that he had been on ice for sixty-nine years and that his actions were the reason that the Allies won the war. Rogers was relieved and saddened that all the people he knew were gone, then Fury offered Rogers a place as the leader of the Avengers to which he agreed.

After a few months of black ops missions the team had grown comfortable with each other. Hank Pym had came up with the idea of creating an A.I that could alert S.H.I.E.L.D. of incoming and potential alien threats, he asked Tony and Bruce if they wanted to help him in creating this A.I. to which they agreed and named the A.I. Ultron.

After creating Ultron, it went rogue and came to the conclusion that humanity must be destroyed. Ultron traveled through the internet to Latveria and mass produced a robot army and attacked New York. Fury ordered the Steve and the Team to combat the Ultron Bots despite the risk of going public. The Team stopped Ultron and deactivated it, successfully saving New York. A few days later the Daily Bugle dubbed them the Avengers.

Fury had spent the past few months tracking down a criminal named Blackie Drago with a state of the art flight suit stole some S.H.I.E.L.D. tech, Fury then learned that Drago under the alias of the Vulture had been hitting other high tech places like Oscorp Industries, Roxxon Corporation, Fisk Industries, Stark Industries and Hammer Industries.

Spider-Man ended up defeating and incapacitating Drago, Fury arrested Drago and took him to the Triskelion, Fury was impressed by Spider-Man's efforts told his spies to keep an eye on Spider-Man.

Fury orders that Tony Stark, Hank Pym and Bruce Banner that they work on a way of stopping him, Reed would also help the three. With the four smartest men on the planet working on a way to stop Galactus, S.H.I.E.L.D. bring in Cable and Silver Surfer. Upon arriving to the Triskelion Cable attacks Silver Surfer for all the horrendous things he'd do in the future, the two engage in a fight that almost destroys the Triskelion, the Silver Surfer ends the fight with his foot on Cable's throat and explains to him that he apologizes for the horrible things he's done and regrets them, but he did it for his planet. Cable reluctantly forgives Silver Surfer and the two come to an understanding.

Suddenly, Silver Surfer would return to the Triskelion with the other heroes (including Spider-Man and Daredevil). Silver Surfer warns Nick Fury that he sees them as a threat and will be coming for them. Stark, Pym and Richards notify the Nick Fury and the heroes that they have discovered a dimension called the Negative Zone that has no life in it and if they could create a wormhole and find a way to push him inside of it, they can defeat him. Quicksilver then notifies them that if they know how to build it and tell him how to build it, he'll use his superspeed to get it built fast, Stark, Pym, Richards and Banner then begin brain storming on how to create a device that can create wormholes.

Nick Fury would give the Avengers (the ones who accepted it) a leave of absence so they can recuperate over the events that had transpired. Meanwhile Fury would file some reports and begin helping rebuild New York.

Nick Fury is a master strategist and an astute judge of character. He uses these talents to great effect in his leadership of S.H.I.E.L.D., coming up with various plans for a variety of scenarios.

Fury has impaired depth perception due to the loss of vision in his left eye.

Retrieved from "https://marvelcomicsfanon.fandom.com/wiki/Nicholas_Fury_(Earth-1111)?oldid=234921"
Community content is available under CC-BY-SA unless otherwise noted.