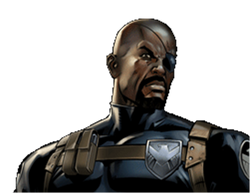 Bald
Unusual Features
Missing eye, with scars (apparently scratched) above and a patch to cover it
Status
Citizenship

Nicholas Fury is the executive head of the Strategic Homeland Intervention Enforcement and Logistics Division later internationally and publicly known as "S.H.I.E.L.D." Fury is also credited as a possible co-creator/designer of the Avenger Initiative as well as the special operations commander.

After Tony Stark publicly announced his identity as Iron Man, Fury went to Stark's home in Malibu, California to talk to him about the Avenger Initiative. Stark initially did not want anything to do with Fury, and ordered him to leave. As Fury drove away, he ordered Agent Coulson to contact Agent Romanoff, saying that they would need her help.

Six months later, after Stark's out-of-control behavior resulted in the Mark II Iron Man armor falling into the hands of the U.S. military, Fury confronted Stark for becoming a problem that he had to deal with. As well as providing information on the background of Ivan Vanko, Fury and Romanoff provided Stark with information and materials from his father, which proved instrumental in finding a replacement power source for his personal arc reactor.

Fury met with Stark once again after Stark had defeated Ivan Vanko's attack on the Stark Expo. Stark had proven himself unsuitable for the Avenger Initiative, but after informing him of this, Fury offered to recruit his services as a consultant.

Fury's recruitment drive then turned to people who had been involved in a destructive incident in Puente Antiguo, New Mexico. He summoned Culver University astrophysics professor Erik Selvig, who had been closely associated with the incident, to an underground S.H.I.E.L.D. facility, and then drew the scientist's attention to a secure, portable storage case. Fury revealed a glowing cube within the case and suggested that it was a source of immense power, although nobody had been able to determine a means of tapping that power. Selvig accepted the challenge to investigate the object further.

Shortly after, the World Security Council officially approved the activation of the Avenger Initiative but ordered Fury to recruit Emil Blonsky, who had been horribly mutated by a combination of an imperfect version of the Super Soldier serum that created Captain America and the gamma-irradiated blood of Bruce Banner and gone on a rampage through Harlem before Banner managed to stop him. They planned on attributing Blonsky's acts on the Hulk, having him exonerated and released in order to allow him into the Avengers and directed Fury to send a liason to meet with General Thaddeus "Thunderbolt" Ross, who had taken custody of the villain. In order to sabotage the debriefing and keep Blonsky off the Avengers (as well as relieving Fury of having to make the choice himself), Agent Coulson sent Tony Stark to speak with Ross in the hope that he would inadvertantly torpedo the arrangement. To his delight, Stark was successful and Ross refused to release Blonsky to S.H.I.E.L.D.

Following the battle for New York, the government granted S.H.I.E.L.D. more funds to invest in homeland security, for which "Project Insight" was created, a security network formed by three heavily-armed helicarriers to protect the Earth. However, Fury discovered something dubious was going on and hired the mercenary Georges Batroc to hijack a S.H.I.E.L.D. boat related to Project Insight, so during the rescue mission, Black Widow would secretly recover confidential files.

After recovering the data, Fury attempted to open the files but discovered they were highly protected. He persuaded his friend and World Security Council member Alexander Pierce to delay Project Insight as S.H.I.E.L.D. could've been compromised.

Fury was soon attacked by the mysterious Winter Soldier and corrupt S.H.I.E.L.D. agents. He barely escaped alive and made it to Captain America's house, where he told Steve that S.H.I.E.L.D. was compromised and should trust no one. Before being gunned down by the Winter Soldier, who had tracked him down, Fury gave Steve a flash drive with the confidential files. Nick was transported to a hospital, but once there his vital signs failed and the doctors were unable to revive him. His body was recovered by Maria Hill.

Fury had successfully faked his death by using a drug which greatly reduced his pulse, and was taken to a secret location to recuperate. Only a small handful of trusted people had any knowledge that he had survived, and this small group expanded when Maria Hill returned from a rescue mission with Captain America, the Black Widow, and their ally Falcon in tow.

The fugitives related spoke of their discovery that S.H.I.E.L.D. had been influenced by Hydra almost since its foundation, and Pierce was the conspiracy's leader. Pierce wanted to use the three helicarriers to massacre any person who could interfere with Hydra's new world order, and planned to launch them soon. Fury gave them a set of three control chips (one for the core of each helicarrier), with which to override the helicarriers' fire control systems and scuttle Pierce's plans.

As Captain America and Falcon got into the helicarriers and successfully reprogrammed them, Nick revealed his survival to Alexander Pierce, and with the help of Black Widow, forced him to release every single one of S.H.I.E.L.D.'s secrets to the world. He even managed to circumvent his deleted retinal scans by revealing to Pierce that he had a second retinal scan in the form of a scan of his damaged left eye. Pierce snatched an opportunity to escape, whereupon Fury shot and killed him.

After leaving S.H.I.E.L.D. in ruins behind him, Fury burned his possessions and, after saying goodbye to Steve Rogers, went to Europe in order to hunt down Hydra's remaining cells.

Fury would make his survival a secret to all but a few select agents, such as Maria Hill, Eric Koenig, and Phil Coulson.

Fury made a surprise reappearance when he came to the rescue of Jemma Simmons and Leo Fitz after they were ejected from the Bus into the ocean. He implored Simmons to lead him to Coulson, which enabled him to join his colleague in an under-resourced assault on a Hydra cell led by John Garrett. Fury came prepared however, and provided Coulson with the Destroyer gun to wear down the Centipede soldiers defending the Cybertech facility. He and Coulson then trash-talked Garrett, long enough for Skye to break Garrett's control over Mike Peterson, allowing Peterson to turn on Garrett.

Back aboard the Bus, Coulson gave the former director of S.H.I.E.L.D. a stern rebuke over using TAHITI to resurrect him. In turn, Fury calmly pointed that he was not suffering any major mental side effects and stated that the reason he brought Coulson back was because he saw him as an Avenger. He then gave Coulson a little black box, with the instructions needed to rebuild S.H.I.E.L.D., and appointed Coulson as the new director. Fury then departed to pursue a clandestine undertaking of his own.

Fury in the least to say an enigma, it's nearly impossible to read his emotions or the way he speaks nor does he tell whatever happened to his missing eye. However while showing Project Insight to Steve Rogers he gives backstory saying "last time I trusted someone, I lost an eye."

Fury and his organisation, S.H.I.E.L.D. share a cynical outlook on life, Fury himself quotes "that S.H.I.E.L.D sees the world as it is, not how it likes to be seen" and Captain America believed that Project Insight was controlling using fear. Fury's main goal was world safety against alien and human threats going as far to create a team of people with extraordinary abilities called the Avengers and use an unlimited power source to charge weapons and lied to his team about it.

Fury is a master spy and an expert tactician. He also proved to have expert marksmanship and a capable combatant.

While his decisions make him appear ruthless Fury genuinely cares for human life and didn't see his Agents or Avengers as pawns, one of his own Agents Phil Coulson was also his closest friend however he did use his death to motivate the Avengers. When New York was under attack by the Chitauri, the Council insisted on a nuclear strike where Fury refused to destroy a populated city.

Nick Fury is a master strategist and an astute judge of character. He uses these talents to great effect in his leadership of S.H.I.E.L.D.

Fury has impaired depth perception due to the loss of his left eye.

Retrieved from "https://marvelcomicsfanon.fandom.com/wiki/Nicholas_Fury_(Earth-1010)?oldid=123002"
Community content is available under CC-BY-SA unless otherwise noted.