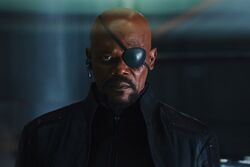 Nick, Foxtrot, One-Eye Eagle, The Man on the Wall
Identity

I only need one eye to see through your bullshit.

Nick Fury came to understand that the world was not a kind place at a young age when he saw his father shot by a mobster. He then took care of his mother when she contracted cancer for the next three years, and after she died he enlisted in the military to give himself a sense of purpose.

For upward of a decade, Nick dedicated everything he had to a life of service. His upstanding record eventually caught the attention of Howard Stark and the dying Woody McCord, who offered him the opportunity to take on the responsibility of the Man on the Wall, which had a simple job description; doing whatever it takes to keep the people of Earth safe from domestic and extraterrestrial threats.

Fury did not hesitate to accept the secretive job. Stark then helped plant him within the shadow government agency known as S.H.I.E.L.D., starting at a low level. Slowly but surely, Fury began to work his way up the ranks, weeding out who he could and could not trust.

Eventually, Fury accompanied the then Director of S.H.I.E.L.D., Rick Stoner, on a top secret mission to infiltrate a suspected Hydra base, where one of S.H.I.E.L.D.'s most valuable assets, known only as "The Tesseract", was being held. During the mission, Stoner and Fury were confronted by Hydra's premiere assassin, the Winter Soldier. Stoner engaged him in battle while Fury was ordered to secure the Tesseract. During the escape, the Winter Soldier managed to kill Stoner, but was then engaged by Fury, who disarmed him before trying to incapacitate him. The Winter Soldier sustained substantial injuries before managing to stab Fury through the eye. It was then that the explosive Fury had placed inside the base exploded, providing cover for his escape, allowing him to return the Tesseract to S.H.I.E.L.D. Property.

Nick Fury was then chosen as the new Director of S.H.I.E.L.D., which had been his goal all along, so that he could hold the position of the most power to help him in his secret duty as the Man on the Wall. After meeting a woman who had been given superpowers through alien experimentation named Carol Danvers and discovering that superpowered human beings, more so than just mutants, were on the rise, Fury started putting together a program he called the Avengers Initiative, which was designed to put together a team of remarkable people capable of protecting the world on a grand scale.

S.H.I.E.L.D.'s Board of Directors consistently shot down the Avengers Initiative, but after Captain America was discovered to still be alive and the Earth was almost immediately invaded by the Asgardian Loki, who allied himself with Hydra, the Initiative was greenlit. Fury then recruited both Danvers, who went by Captain Marvel, Captain America, two of S.H.I.E.L.D.'s best agents, Hawkeye and Black Widow, Howard Stark's son, Tony, who became the infamous Iron Man, world renowned scientist Bruce Banner, who had accidentally mutated himself into the Hulk, and even Loki's brother, Thor, the God of Thunder.

After the Avengers proved to be a success and their popularity around the world skyrocketed, Fury finally began to feel at ease. However the controversy of the team being run by S.H.I.E.L.D. quickly came to light, and Fury agreed that it might be best for the team to operate on its own terms, as he had faith that they all shared his morals. Since Hawkeye and Black Widow both left S.H.I.E.L.D. to stay with the team, Fury then put most of his focus into recruiting more special ops agents, and even certain mutants and Inhumans. One who particularly stuck out to him was the young Inhuman Daisy Johnson, aka Quake, who quickly became his protege.

When Fury learned the truth about the Avengers traveling to the future and discovering the "Prophecy of Infinity" that foretold Earth's destruction, he went into panic mode. Believing he was destined to fail at his one responsibility, he started exerting all of S.H.I.E.L.D.'s resources into preventing specific outcomes that might change the future. However, due to his secretive nature, many of his subordinates came to question his decision making, which only strained the inner workings of S.H.I.E.L.D. when Fury needed them to all be in synch.

Retrieved from "https://marvelcomicsfanon.fandom.com/wiki/Nicholas_Fury_(Earth-101)?oldid=250548"
Community content is available under CC-BY-SA unless otherwise noted.