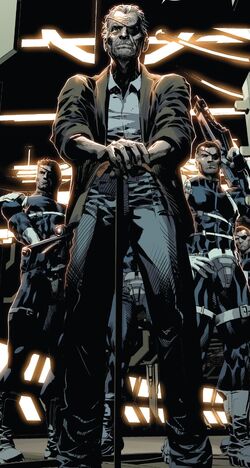 Well, it's been a real pleasure serving this damn country. I've already lived the most precious life that I wanted, and the greatest son I ever had... Thank you, and God bless America...

Born and raised in the area of New York City known as Hell's Kitchen around the early 1920s, Nicholas Joseph "Nick" Fury, Sr. was around 20 years old when he was drafted into the United States Army to fight the tyranny of Nazi Germany in World War II. He soon flourished in the ranks of the U.S. Army and became sergeant. During this time, Nick was asked to lead a handpicked squad of highly trained soldiers. This squad would soon become known as the famous Howling Commandos. Sergeant Fury and the Howling Commandos fought through much of World War II, with missions in France, Greece, Belgium, Holland and even inside Nazi Germany itself.

The team also encountered and fought alongside a few of America's superheroes, such as Captain America. Nick even met Logan, the person whom would later be known as the future X-Man Wolverine. Nick Fury managed to get most of his team members back alive after each and every mission. However, Nick himself was injured by a grenade at the end of the war. This grenade was the cause of the eye injury that eventually cost him the vision in his left eye. Fury began covering the eye with a cosmetic black eye-patch, which became one of his greatest trademarks and battle scars after the second world war.

At some point in his life after the war, he became an O.S.S. agent and met a fellow agent named Katherine Nia Jones, who in her career as an agent she met and worked with Nick Fury. The pair worked together on a mission against Hydra, destroying an advanced base in Czechoslovakia. The two later became lovers, but she fell pregnant and the two had a son named Nick Fury, Jr. Due to Katherine's death giving birth to their son, Fury went depressed after losing the woman that he loved and later pledged to raised and protect their son on his own at any cost, the same thing Katherine wanted to do if she was still alive.

It was also at this time that he and most other Howling Commandos began their annual injections of the Senility Formula, a chemical they develop as an alternative for the Super-Soldier Serum during the war. Unfortunately the last remaining samples of the serums were destroyed after it's ship carrier was sunken into the bottom of the sea, after being targeted by a USSR submarine. Somehow they manage to save last one and injected it on Fury who was volunteering to be injected to serve the war once again, during the Cold War. Injections with this chemical was assumed to have greatly slowed his aging process like the original formula, but later on it showed to have the exact opposite effects.

Though it gave Fury the super strength that is twice stronger the the original serum, the more he exerted himself using his strength, the faster he aged, which is due to his protein in his DNA being ravaged by oxidants and him suffering from oxidated stress. This side effect had progressed so far that, while Nick was chronologically 30, he looked as though he was in his mid 50's after a year with his powers, eventually turning into an old man. Because of this, the intoxicating serum had to be removed out of his system, days after during the middle of the Cold War.

In honor of Steve's memory and the defeat of the Axis powers, the peace-keeping organization S.H.I.E.L.D. was founded by Peggy Carter, Howard Stark, General Chester Phillips, and Fury, who is now a captain general in the U.S. Army. During the day of his son's birth and Katherine's unexpected death which led to Fury's depression, the newly-improved serum known as the Infinity Formula had been developed and has been used on several soldiers, including the rest of the Howling Commandos. Their newly-born son was injected by the non-threatening serum, since it was the request of Katherine moments before her passing.

Fury himself, rejected getting injected by the new serum, since he's not sure what might be the side-effects if it gets injected into his system, whose already been previously affected by the Senility formula. He accepted his fate not becoming a Super-Soldier, but he is still proud that his son gets to be someday once he grows up. Fury eventually gets promoted into becoming S.H.I.E.L.D.'s directorate, and became it's director for several years, until he decided to finally retire from his position.

As a retired citizen, Fury had been living a pretty normal life living in his old mansion located in Manhattan, near the site of the Triskelion. During his retirement, he had seen many changes in his life such as seeing his own son take the place as the new director of S.H.I.E.L.D., which made him become very proud and honored as his father, since his son grew up to be a great man just like his old man, only a lot better. He also became very glad hearing the revival of his good old pal, Steven Rogers after he was finally found on the icy waters of the Arctic. He visited him in the Triskelion a month later after his reawakening into the modern world and after several decades, they reunited once again.

He also had been travelling around the world to fulfill the things that Katherine wished to have done when she grows old. Along the way, he had been encountering many events around the world involving about superhuman activities, such as the Chitauri Invasion in New York, the long-time Mutant War that had occurred several places located in America, the mysterious Inhuman sightings, the Second Dark Elf Conflict, and so much more. Seeing those events just made Fury remember the "good ol' days" when he was still during the war, fighting the fights and battling the battles, with his former fellow comrades.

Fury's long-time vacation lasted for several years during his retirement, until it eventually ended due to another series of events caused by Hydra, who swore great revenge against S.H.I.E.L.D. once more after it momentarily fell down with its enemy organization during the Hydra Uprising. During this new upcoming threat, the United States was threatened to be torn apart by the organization's subsidiary group, the remaining anti-government militia of Hydra, whose surviving operatives began various assassinating S.H.I.E.L.D. operatives while they were living their duties.

When America seems to fall apart as a whole nation under the recent developments, Captain America comes out of his retirement and starts fighting against militia armed with sentinels, alongside S.H.I.E.L.D., the Avengers, and the rest of the heroic Ultimates. Because of this, old man Fury finally decided to visit the Triskelion to help his son and the heroes fight off the threat of the anti-government forces.

At the same time, the X-Men travels through the European plains of Sokovia to end the anti-mutant war started by the rising super-villain, Mister Sinister, who took on the form of his former leader, Magneto, in order to frame him and unintentionally cause Magneto's Brotherhood of Mutants to break apart into two factions, Sinister's and Magneto's. Eventually, Magneto's faction decide to unwillingly reside with the Ultimates in order to help and stop Sinister's evil schemes on threatening mutantkind.

At the moment of sudden catastrophe that was the infiltration on the Triskelion, Fury had no other choice but to do something that he vowed to never do ever again before. Out of self-sacrifice for his allies and his own son, Nick made the decision of injecting himself with the last known serum of the Senility Formula, something that was always been hidden in his pocket ever since he retired, in order to save his son from several Hydra super-soldiers who infiltrated the Triskelion to begin with. He manages to defeat and seemingly kill all of the super-soldiers as they try and make their way escaping the surrounded facility, but at the same time it costs his own life after he uses too much of his strength, degenerating all of the cells in his body that slowly killed him in the end, much to his own son and allies who mourned his passing.

Hell's Kitchen (which happens to be the birthplace of General Fury), specifically the Clinton Church, was the very place Fury has held the funeral for his own father. Only the heroes that knew him personally were there along with almost a thousand members of retired and active operatives who once loyally serve alongside him since the days of World War II, including Steve Rogers, Dum Dum Dugan, Logan Howlett, Maria Hill, Phil Coulson, the original and current Howling Commandos rosters, and several more others.

In honor of his memory, Rogers, and other few of his closest friends and associates, gives an eulogy at the funeral in the place of Fury (Jr.), since the latter would later disappear from the funeral (most likely out of grief or other plans to avenge him by finding the loose Hydra commanders, especially Baron von Strucker), saying that he inspired a lot of lives for almost several decades throughout his altruistic deeds as a soldier, a co-founder, and a former director of S.H.I.E.L.D., and spoke more on what else could be the best qualities about him and the legacies that he left in this world before his untimely passing. Subsequently, Fury was buried at the Calverton National Cemetery, the same graveyard wherein his fallen comrades had also rested (mostly his World War II allies), including his deceased lover and the mother of his child, Katherine Jones.

Senility Formula: Even before his son by the Infinity Formula, he already volunteered to be injected by a recreated version of the Super-Soldier Serum, which granted him to gain superhuman abilities, same as the original serum. This made his extent at joining and winning several wars for more than a year, until Nick had been experiencing some side effects that he would age a little bit every time he exert his strength. The more he exerted himself, the faster he aged, which is due to his protein in his DNA being ravaged by oxidants and him suffering from oxidated stress. This side effect had progressed so far that, while Nick was chronologically 30, he looked as though he was in his mid 50's after a year with his powers, eventually turning into an old man.

Because of this, the intoxicating serum had to be removed out of his system, days during the middle of the Cold War. Out of self-sacrifice, he later injected himself with the last formula in order to save his son during the Nimrod Invasion. He manages to fight off the super-soldiers, but at the same time it costed his own life after he uses too much of his strength, degenerating all of the cells in his body that slowly killed him in the end.

Retrieved from "https://marvelcomicsfanon.fandom.com/wiki/Nicholas_Fury,_Sr._(Earth-61615)?oldid=234535"
Community content is available under CC-BY-SA unless otherwise noted.