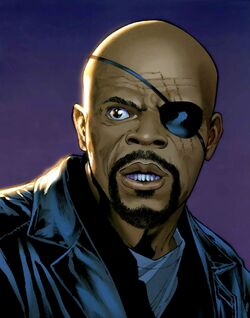 Trouble, Ms. Romanoff. No matter who wins or loses, trouble still comes around.

During the day Nicholas Joseph Fury, Jr. was born, his aging had been slowed greatly after getting injected by the Infinity Formula, an improved serum of of the Super-Soldier formula that was fully developed by Dr. Berthold Sternberg. Fury was first inoculated with the fully-developed serum in when he was born by the request of his father, General Nicholas Fury. Due to its cumulative effect, Fury no longer needs additional doses to prolong his life span, believing that his son deserved to live more longer and become a better man than he could ever be. Nick's mother, Katherine had died a year later after giving birth to her son, which led to Nick honoring his all of his achievements to both his parents, even if his mother had already passed away.

For several years, he was a former officer of the US Army, obtaining the rank of Colonel before leaving the military. He had a lot of action in Soviet territory. He was responsible for deporting Vinorovsky when he tried to sell bad information during the Cold War. Later he became an espionage veteran of the C.I.A. during the Cold War. At one point during one of his missions, Fury lost sight in his left eye, being the cost he had to pay for trusting someone. Later, he joined S.H.I.E.L.D., a covert international peacekeeping organization which operates as humanity's first line of defense against Earth's most dangerous enemies.

He quickly impressed S.H.I.E.L.D.'s higher-ups, and was promoted to the position of Director, becoming the leader of S.H.I.E.L.D., making him to gladly finally follow his father's footsteps. He led S.H.I.E.L.D. One of his greatest known actions included resurrecting the Super-Soldier Program, which began in the S.S.R.'s Project Rebirth in the Second World War, spearheading the Avengers Initiative, Project T.A.H.I.T.I., Project Insight, Project P.E.G.A.S.U.S., and other significant but mostly classified operations. During his time as the new director, Nick Fury sent a team led by Hank Pym to find the crash site of the Valkyrie on Greenland after tracking it's location. Steve Rogers, the great war hero that was Captain America's body was found inside, perfectly preserved in ice. His body was later defrosted and then shipped to S.H.I.E.L.D. Headquarters in New York City, where he later woke up into the modern world of the 21st century.

During the late 1990s to the early 2000s, Fury and S.H.I.E.L.D. eventually started to deal with alien contact, including their encounters with allies such as the dynamic duo that was the human-Kree hybrid Ms. Marvel and the lost renegade Kree Captain Mar-Vell (with the former eventually taking the mantle of the latter) and later enemies such as the Asgardian God of Mischief that is Loki Laufeyson, but all the problems S.H.I.E.L.D. had encountered in the past to solve eventually led to the formation of the Avengers later on, a response team that was recruited to save the world during the alien invasion of Earth, known today by many as the Chitauri Invasion, which infamously took place during the Battle of New York.

Preceding the Hydra Uprising, an assassination attempt was made on his life. Fury survived but elected to remain officially dead, telling only a select few that he was still alive, most notably Maria Hill, Captain America, and Black Widow. After the attack on the Triskelion, he went deep underground to begin rooting out the forces of Hydra. As a part of this mission, he joined Phil Coulson and helped him and his team defeat John Garrett. Afterwards, he made Coulson the new Director of S.H.I.E.L.D. and left to continue his mission. He helped the Avengers defeat Ultron in the Ultron Initiative and later assisted them in the newly-built Avengers facility known as the Avengers Tower, which is formerly the Stark Tower.

He later returned to S.H.I.E.L.D., specifically the Triskelion in order to help his former comrades fight of the forces of Hydra's super-soldiers. They were outnumbered and strengthen by the enemies, but out of self-sacrifice, his father injected himself with the last formula of the dangerous Senility Formula in order to save his son from several Hydra super-soldiers who infiltrated the Triskelion. He manages to defeat and seeming kill all of the super-soldiers, but at the same time it costs his own life after he uses too much of his strength, degenerating all of the cells in his body that slowly killed him in the end. Nick mourned his father's death which led him into helping S.H.I.E.L.D. and the Ultimates one last time to avenge his own father, and 'till the end they were victorious.

Fury has not been seen or heard from since after his father's death during Ultimate War, until it was later revealed that he left America alone months before the it's events, started and sets off on his own mission to travel across Europe to find the new secretive headquarters of Hydra and take down Baron von Strucker, the new leader of a fragmented Hydra faction, ever since the Red Skull's second banishment and disappearance during the surprising and phenomenal ending of Ultimate War, something that was thankfully won by the persistent joint efforts of heroes all over the world.

Infinity Formula: Nick Fury's aging had been slowed greatly by the Infinity Formula, a serum that is actually a recreated version of the Super-Soldier Serum created by Dr. Berthold Sternberg. Fury was first inoculated with the fully-developed serum in when he was born by the request of his father. Due to its cumulative effect, Fury no longer needs additional doses to prolong his life span.

Retrieved from "https://marvelcomicsfanon.fandom.com/wiki/Nicholas_Fury,_Jr._(Earth-61615)?oldid=256343"
Community content is available under CC-BY-SA unless otherwise noted.