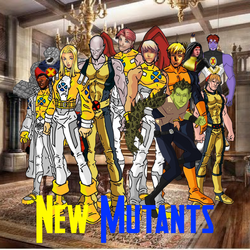 Charles Xavier, founder of the X-Men, became increasingly worried after seeing what the Hellfire Club were doing: opening a school for teenage mutants, training them to be evil.

His friend and colleague, Moira MacTaggert finally convinced him to create a group of young mutants after receiving accepting Icarus, Cannonball's brother.

Extremely concerned by his sister's actions, Sam Guthrie asked Professor X to lead the new team. After evaluating the situation, Xavier told the young man that he could lead the team from the Mansion, and not in the field, as he would be needed in the X-Men. Cannonball was not convinced by this decision, but his brother, Jay, told him they would be alright. The School Staff started working towards this goal, handpicking their finest students to join the team. After gathering ten students, Cannonball officially green-lit the team, naming them the New Mutants.

As the mutants were becoming extinct, the original New Mutants were killed. However, Blink, Sunspot and Warpath continued with the team. When recruiting Rictor and Shatterstar, the latter came up with the name Free Mutants, since New Mutants sounded odd during times of extinction. However, this team was wiped off of existence.

Retrieved from "https://marvelcomicsfanon.fandom.com/wiki/New_Mutants_(Earth-1010)?oldid=204344"
Community content is available under CC-BY-SA unless otherwise noted.