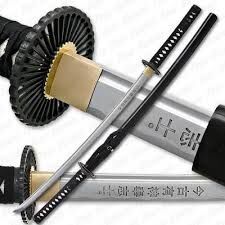 Green Goblin 2099 swords are Atomic Ionic Swords that are upgraded version of Japanese swords. The swords are made from Antarctic vibranium alloy mix the can even cut through adamantium. They have the capability of splitting atoms, making they extremely powerful. When used they turns green and have electric charge.

Green Goblin 2099's Swords are made of Antarctic Vibranium.