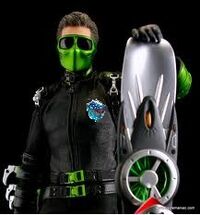 The New Green Goblin 2099 Armor or Green Goblin 2099 Armor is a cybernetic powered armored suit is a upgraded version of Green Goblin II'suit, it is upgraded version of Unstable Molecule Fabric or "UMF." Originally invented by Reed Richards of the Fantastic Four and Memory Plastics, this armor was made to be indestructible and was designed to interact with superpowers without hampering them, (Memory Plastics) diffuse impact damage of a piercing attack into a bludgeoning one by spreading it over the whole body.

Like Harry's Goblin suit differed from the original Goblin's suit in that it was black as well as green, and had a different, less threatening but more practical face mask. The UMF does not dull strength of his armor. The Green Goblin 2099 Armor has built in sonic emitters. The suit has highly effective and complex camouflage (a chameleon circuit), chameleonware allows Michael to take on the appearance of normal clothing, turn invisible to the eyes, and even disguise his physical features.

The Green Goblin 2099 Armor is reinforced which offered Green Goblin 2099 protection from energy weapons, as the energy blasts can not penetrate it and piercing attacks like bullets and sharp weapons. However, this does not prevent Michael from suffering the impact of the blasts, any damage up to that 40 mark is not prevented, it is only reduced by 1/3 as the thin layer of memory plastic attempts to redirect the kinetic energy across the material instead of through it.

Of course he heals fast enough not to be seriously injured. Likewise, if Michael fell from a great height, the UMF would not protect him from the impact of landing it simply would not tear in the process but the Memory Plastic would and he would get up and walk away unharmed. While in the Armor, Michael's mask & Tech shades and full Armor can not be removed by enemies even if he were captured or disabled in some way, The Green Goblin 2099 Armor is bonded to him through a Cyberpathy link (base on Tony Stark's Iron Man tech) and his molecular geometry. His face mask has a built-in Cyberpathy link,artificial intelligence named POTTS with Recorder Hard-Light Holograms tech it can also scan timelines for any changes that occur within it and O2 mix maker, he can go almost anywhere with his Tech shades he can see in complete darkness, can see heat patterns and has Micro vision. His Face-mask as Psi-Shielding Michael's mind is shielded from even the strongest telepaths when he is in his armor. His armor can also scan timelines for any changes that occur within it.also.

He has gloves with retractable claws that can cut through steel, titanium and adamantium. The Green Goblin 2099's gloves are interwoven with microcircuit conducting filaments capable of channeling pulsed discharges of 10,000 volts of high frequency electrical power from rechargeable power packs in both his glove cuffs and Armor. They had the capacity to discharge for up to 30 minutes of sustained fire before depleting their power supply. His suit also has Sound Nullification tech in it.

Force Field: He can generate a force field out of his own hands and the body of the armor. Update in 2101: Anti-Makluan advanced technology ( quantum neutralizer satellite weapon to temporarily disable the Makluan Rings and other such tech.) and Anti- Technarchy and Phalanx tech.