Following the aftermath of the Onslaught War, the surviving heroes joined forces to have greater chances of overcoming future threats. As the Defenders of Earth, the team would fight to ensure its protection, whether it be on the home front, space, or even across alternate universes. Joseph Adams was the only known teenage hero in battle, so a sub team was established with him acting as the leader. He was given the freedom to scout out its members. Both teams cooperate on occasion, but each has a different set of missions, with the more dangerous ones going to the main team. 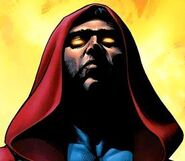 Guardian
Add a photo to this gallery 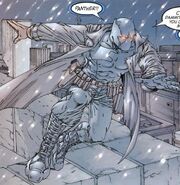 Panther
Add a photo to this gallery

Kid Wolf
Add a photo to this gallery

Speedy
Add a photo to this gallery

Many members of the team started to doubt if Phoenix was on their side, they didn’t feel that they could trust him. He would usually be in seclusion building the Defenders’ HQ miles above New York. Whenever he was around, they felt that he was invading their minds.

However, the team tried to look past this and they continued with their protection of Earth. During one mission, Phoenix stayed above the conflict and didn't help. He just scanned the area and avoided everyone. His actions nearly got Angel killed, but she was saved by new member Captain X. This angered Hawkeye and he decided to confront Phoenix. Before he could do anything, Phoenix stopped his movement. Phoenix's eyes were glowing when he walked up to Hawkeye and it looked as if he were going to kill him. Suddenly his eyes returned to normal and Hawkeye was released. Several building were being levitated as well and then they fell back.

Phoenix apologized to Hawkeye and called for a meeting back at the tower. Phoenix explained why he was acting like an enemy of the team. The Phoenix Force[1] was beginning to consume him, and he was losing control.

Phoenix detected the psyche of a cosmic being heading to their dimension from another one. His name was Proteus and he was hell-bent on destroying this universe. The Defenders prepared and soon enough, Proteus arrived. Phoenix tried to mentally paralyze Proteus, but he couldn't get through. Crimson Shadow knew that Proteus would kill his team because they were not suited to fight him yet. So he tried to end the fight on his own. Warlord tried to stop his brother, but Proteus had nearly killed him. It looked as if Crimson Shadow was winning. Then he sent a blast towards Proteus, but Proteus did the same thing to him. The beams hit and caused an extremely bright explosion. When the team could see again, Crimson Shadow and Proteus were gone. Crimson Shadow sacrificed himself to stop the cosmic threat.

The event triggered an uncontrollable response from the Phoenix Force in Elliot. He sent a psychic shock wave throughout the planet that injured and rendered everyone unconscious. Phoenix deemed himself too dangerous and after he brought the Defenders back to the tower, he quit the team. The farther away Phoenix went from the Defenders' Tower, the more it began to slowly drop from the sky.

Warlord was voted to become the leader of the team and he accepted. Shortly after he showed the team his new persona, Guardian, and he deemed himself a full-fledged hero. With Crimson Shadow gone and Phoenix missing, Misery was having a hard time re-adjusting to the team. He became more independent and went on solo missions. This mindset eventually made its way to the other members as they no longer operated as a team. Soon afterwards, Misery went missing as well. Guardian told the team continue its protection of Earth, while he searched for his missing family. However, Kid Wolf, volunteered to find them while he was out recruiting his team, so Guardian could keep his full attention on team-based missions.

Guardian refused the help and he kept to himself which led to a division within the team.

With Guardian no longer giving direct missions, Panther and Hawkeye began to act on their own, though as a duo. This led to a strain in Hawkeye's marriage with Angel as he was away for the birth of his son, which led to a subsequent divorce. Hawkeye quit the team and moved out of Defenders' Tower not stating whether he'd return or not. Angela retired from her Angel persona to take care of her baby, Tim. She became the team's coordinator. The loss of her husband however took a toll on Angela. She two began to lose faith in the team. She eventually encountered Hawkeye again as he came back to the tower, but he was awkward around her, not wanting to make eye contact. He left the tower in a hurried state happy that Angela didn't deduce that he was actually Elliot in disguise.

Captain X tried consulting with his father, but felt it was no use. He was in as much pain as Guardian because both lost family. Seeing no use for himself on Earth, Captain X returned to Asgard. Panther had disappeared after that, presumably returning to Wakanda to consult Black Panther about lifting his exile. Angela caught Super-Kree removing his armor and she saw that he was just a child. Still remembering that he was an android of some sort, she began to question his motives. Kael held firm the idea that he was organic. He claimed that it was his cybernetic armor that healed him.

Angela did not trust him, but had to much to deal with to focus on him. She placed him on the Outsiders team for two reasons. So Kid Wolf could keep an eye on him and because he was still a child no matter what his origins or intentions. However, Kael left the tower with his armor and did not return. He was on his own mission to discover what had happened to him. Kael returned to his family's farm to obtain a Kree ship to return to Hala and confront the Supreme Intelligence. The Defenders were no longer one entity, but broken heroes. All that remained were the sole members of the Outsiders, Kid Wolf and Speedy.

Retrieved from "https://marvelcomicsfanon.fandom.com/wiki/New_Defenders_(Black_Ops_Unit)_(Earth-616)?oldid=55216"
Community content is available under CC-BY-SA unless otherwise noted.