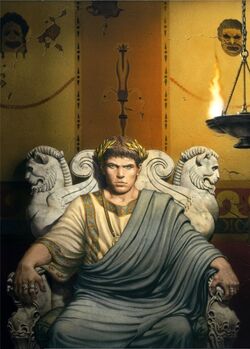 In the years of 54 to 68, Nero eventually later became Emperor of Rome. He was the son of Agrippina the Younger and an adoptive son of her last husband (and uncle) Claudius. Besides being an emperor of the empire, he was also a passionate actor, harpist, singer and songwriter, although that doesn't cancel out the fact that he was always been deposed by his many revolts due to his countless infamous actions that defined his overall reputation during his empirical reign.

During his rule, he was revealed to have assassinated his own mother, Agrippina the Younger due to her influential morality and role as a concerned mother would potentially ruin his future plans as an emperor. He had also killed his first wife, Octavia through unknown means and reasons, and allegedly, even his second wife, Poppaea Sabina, though the latter has yet to be proven by Nero himself whether it had any truth to it.

At some point in time months before the year of 64, Nero was mysteriously approached by a group of secret agents, introducing themselves to the emperor as a part of a clandestine organization, in which their headquarters is secret found beneath the city of Rome itself, known as the Immortal City. The agents peacefully told Nero all of their truest of intentions, showing Nero a vision to the possible, dark future, knowing that a great threat from above have since already been on Earth to enslave, or even to exterminate humanity from the shadows by replacing them as time passes.

Knowing that the intentions of the agents were to recruit Nero into their brotherhood of the shield in the first place and help deal with the upcoming onslaught, the latter willingly agreed their offer, with the agents not even realizing that the Roman Emperor had already taken advantage on their own mission from the beginning as a part of Nero's egocentric goal to spread his fame, popularity, influence, and ultimate power beyond Rome, Italy. Along with his task, the potential success of his accomplishment upon the mission would reward him the "magical" serum known as the Elixir of Life, something that would extend his normal lifespan, once he is finally an official member of the brotherhood.

In his mission, Nero carefully and tactically studied and analyzed the hidden refuge of the said threatening creatures could have been for the next few months. After discovering that was found in the heart of Italy that is Rome through the use of his public influences and his secretive forces, he had finally planned out all his devious tasks to deal with the extraterrestrial threats, before finally executing them during the exact year of 64 with the assistance of some members from the organization he allied himself with.

On the night of July 18, A.D. 64, a fire mysteriously started in the Circus Maximus that would burn out of control, leaving little of the city untouched. Unbeknownst to everyone else at first until it was eventually figured out later on, Nero reveals himself to the brotherhood organization as the true responsible for setting the great fire of Rome, although in his broad "defense," he was the mastermind behind it, but it was his loyal men who started the fire. In Nero's main defense, he then reveals that the heart of Rome was already infested with the mysterious hostile creatures they were warning him about at first.

Nero also claimed that the creatures tried to communicate and negotiate with him that they would be leaving their home planet without any problem, as long as he keeps their presence undiscovered from the rest of his people, only to be shown by Nero that he decided to come up with his own genius solution which was to sadistically set the fire on their secret refuge within the so-called "heart of Rome," and most of Rome just to keep the true reason of his agenda undisclosed, all for the sake of protecting mankind's future. When questioned about the countless lives of the innocent who were lost in the fire, Nero confidently told the agents that some sacrifices were have to be made in order to fulfill a greater purpose, much to most of his allies' dismay.

Due to Nero's unforgivable and unethical ways of dealing threats that could have destroyed the reputation of the organization, the supreme council immediately defect him from the brotherhood, leaving his goal to achieve immortality through the Elixir of Life undone. With no one there to help him deal with the aftermath of the following but himself and his power as an emperor, a desperate and infuriated Nero decided to accuse the many innocent Christians living in Rome at the time. Anywhere from two hundred to three hundred Christians were put to death through many ways including execution and entertainment alike, without any mercy.

He would continue to rule Rome as an infamous emperor for the next following years, until he allegedly committed suicide in June, A.D. 68 along with the downfall of his reign over the Roman Empire, with everyone across the world not even knowing that it was all part of Nero's ultimate plan to banish himself from the face of the earth and continue to live in the shadows, focusing his next goal that is finding such ways on how to return to the brotherhood of the shield that he once partook in ages ago, and pursue his goal towards finding and obtaining the Elixir of Life onto himself and his loyal followers.

At some point six months after the end of his reign as the Roman emperor and his staged death to the public, Nero decided to meet with his former fellow ally within the brotherhood and good friend in secret, King Pharasmanes I of Iberia. Pharasmanes was so convinced by Nero's overall "sincerity" to make amends to the rest of the organization so he could finally get the chance to rejoin once more, to the point where his unhinged ally had unknowingly tricked and led the clueless king to his own demise after getting himself killed by his own loyal followers, not knowing that they were efficiently deceived by Nero himself to turning against their former master.

Nero then had taken advantage over the corpse of the fallen king by experimenting it with the assistance of his smartest intellectual followers, somehow successfully extracting a great amount of sample of the Elixir of Life out of his system and was able to synthesize and reproduce the latter, before finally injecting the serum into his own system, as well as some of his men, enhancing their lifespan even further, beyond normal. With his first main goal finally achieved, Nero officially began his vendetta in infiltrating the brotherhood of the shield through means the diabolical genius has yet to unveil.

Advanced Longevity: Through the usage of the enhancing serum known as the Elixir of Life, Nero has become nearly immortal throughout the ages, as long as he takes enough dosage from time to time. Due to the effects of the serum, Nero's aging has been slowed if not completely halted allowing him to live for more than several countless centuries.

Retrieved from "https://marvelcomicsfanon.fandom.com/wiki/Nero_Germanicus_(Earth-61656)?oldid=231559"
Community content is available under CC-BY-SA unless otherwise noted.