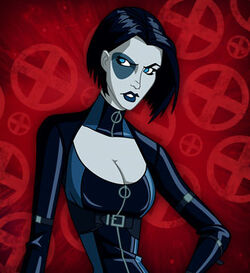 Black
Skin
White
Unusual Features
As results of her mutation, she has chalk white skin, and a black circle around left eye
Status
Citizenship

Becoming a mercenary, Neena was offered "the deal that will change the world". Agreeing, Thurman met up with Magneto, who told her about the Brotherhood, his goal for mutant superiority, and he the offer was to join his side. Thurman still joined, angry at the world for what happened to Milo.

This unconsciously controlled talent is triggered when she is in a stressful situation (such as fighting or escaping). This effect constantly emanates from her body at all times and is completely subconscious. However, it is also largely participatory - in order for the luck to take effect, Domino herself must engage in an action whose chance she can affect. She cannot consciously control her ability. Domino can only activate it by putting herself in a position in which she could be harmed. She has shown some level of control over her powers.

For example, if debris falling from the sky was about to hit her in the head, she would still be hurt if she stood still. However, if she tried to avoid them, she would move perfectly to avoid each and every piece about to hit her. In addition if Domino where to stand before a hail of bullets she would be a bullet-ridden corpse. Instead, she must take action; in attempting to avoid the gunfire, she will miraculously bob and weave just right to avoid every single shot.

As a byproduct of her probability abilities, Domino's cerebral cortex emits a current of bio-electric pulses down her spine to instinctively guide her movements during such situations, which has the added effect of augmenting her natural reflexes and agility to near-superhuman levels.

Superb marksman with various firearms, highly skilled athlete, excellent swimmer, adept in use of explosives. Extensive training in various armed combat techniques and the martial arts. She also seems to be fluent in multiple languages.

Domino is scared of chickens, also known as Gallinophobia.

Equipment: None known.
Transportation: None known.
Weapons: Various firearms and knives; staff that fires unspecified ammunition, can be used for balance when jumping, and is equipped with sensors.

Retrieved from "https://marvelcomicsfanon.fandom.com/wiki/Neena_Thurman_(Earth-727)?oldid=213400"
Community content is available under CC-BY-SA unless otherwise noted.