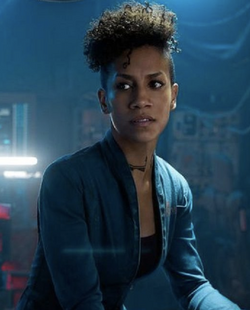 Earth-3121
Base Of Operations
The Outside
Characteristics
Gender

They say my mutant power gives me luck... but they never specified what kind.

Neena Thurman was born in New Jersey and was abducted when she was 10-years-old after her parents were assassinated by the Winter Soldier, who brought to the Red Room, where she was trained to become an assassin. When her mutant powers activated, the Red Room took advantage of them and used her to pull off the most successful assassinations in history, even eventually killing the Winter Soldier himself. However, she eventually got onto the radar of S.H.I.E.L.D. Director Charles Xavier, who sent his top agent, Wolverine, to assassinate her. However, the two ended up falling in love and he liberated her from the Red Room, recruiting her to become his partner within S.H.I.E.L.D.

Black Widow was eventually recruited by the Outsiders, who requested her help when Quake began operating from behind the scenes. Neena was honored to be chosen for a higher calling and saw it as an opportunity to further right the wrongs she committed in the Red Room, quickly finding herself a new family within the Outsiders. Although she frequently visits her home reality to see Wolverine, they have both accepted where her duties lay.

[[Category: In a relationship with James Howlett Characters]]
Retrieved from "https://marvelcomicsfanon.fandom.com/wiki/Neena_Thurman_(Earth-3121)?oldid=246137"
Community content is available under CC-BY-SA unless otherwise noted.