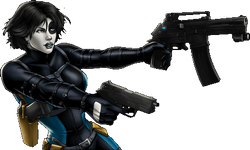 Black
Skin
White
Unusual Features
As results of her mutation, she has chalk white skin, and a black circle around left eye
Status
Citizenship

Give me one good reason why I shouldn't blow your head off after what you've done to me?

The woman who would become known as Domino was actually the result of a top-secret government breeding program intended to develop the perfect weapon. Domino was the only test subject to survive, but her "luck" power was deemed a failure to meet the project's goals. Domino's biological mother broke her out of the project and left her with Father Rudolpho Boschelli, in the Church of the Sacred Heart in Chicago. Domino eventually escaped from the Church and became a mercenary. Later, while working for the NSA, Domino was assigned to guard the genius Dr. Milo Thurman, whose analytical ability made him too dangerous for the government to let him roam free. Over time, Domino and Thurman fell in love and were married. Thurman had a thing for Dante's "Inferno" and called Dom "Beatrice". The two separated after a raid on the facility by AIM members, with Milo believing Domino had been killed during the altercation.

Neena was approached by Magneto to join his Brotherhood of Evil Mutants.

Probability Manipulation: Domino is a mutant with the ability to subliminally and psionically initiate random telekinetic acts that affect probability in her favor by making improbable (but not impossible) things to occur within her line of sight, thus causing her to have "good luck" and her opponents to have "bad luck." This phenomenon can be anything from an enemy's equipment failure to hitting just the right switch with a stray shot to shut down an overloading nuclear reactor. The full extent of her powers is still unknown.

This unconsciously controlled talent is triggered when she is in a stressful situation (such as fighting or escaping). This effect constantly emanates from her body at all times and is completely subconscious. However, it is also largely participatory - in order for the luck to take effect, Domino herself must engage in an action whose chance she can affect. She cannot consciously control her ability. Domino can only activate it by putting herself in a position in which she could be harmed. She has shown some level of control over her powers.

For example, if debris falling from the sky was about to hit her in the head, she would still be hurt if she stood still. However, if she tried to avoid them, she would move perfectly to avoid each and every piece about to hit her. In addition if Domino where to stand before a hail of bullets she would be a bullet-ridden corpse. Instead, she must take action; in attempting to avoid the gunfire, she will miraculously bob and weave just right to avoid every single shot.

As a byproduct of her probability abilities, Domino's cerebral cortex emits a current of bio-electric pulses down her spine to instinctively guide her movements during such situations, which has the added effect of augmenting her natural reflexes and agility to near-superhuman levels.

Superb marksman with various firearms, highly skilled athlete, excellent swimmer, adept in use of explosives. Extensive training in various armed combat techniques and the martial arts. She also seems to be fluent in multiple languages.

Equipment: None known.
Transportation: None known.
Weapons: Various firearms and knives; staff that fires unspecified ammunition, can be used for balance when jumping, and is equipped with sensors.