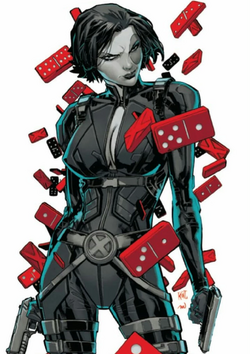 My friend, it is not your lucky day.

Everything always seemed to work out for Neena Thurman. She didn’t quite know why, she just assumed she had really good luck. Eventually she realized how lucky she was, that he mutant power was that of probability manipulation.

She first tried to cash in on this talent by going to Las Vegas in an attempt to swindle tourists. However, tale of the mischievous “Domino”, eventually attracted the attention of the Weapon X Program, who sought to turn her into a weapon. But they knew they could not ambush her. Instead, they approached her with an opportunity to make more money than she'd ever seen in her life.

All she had to do was assassinate whatever target she was given, and she would become richer than her wildest dreams. Reluctantly, Neena accepted and was brought to the Weapon X Facility where she was put through extensive training. Over time, she came to realize that who she was working for was evil, and inadvertently used her powers to set free Wolverine, which led to the dismantling of the entire organization.

She went on to become an assassin under her own employ, choosing targets she believed deserved to die. She was eventually hired by Magneto to assassinate Senator Kelly, which she vehemently accepted.

However, her assassination attempt was interrupted by the X-Force, resulting in the first time things did not automatically go her way. She became bitter and resentful, and offered her permanent services to Magneto and the Brotherhood.

Retrieved from "https://marvelcomicsfanon.fandom.com/wiki/Neena_Thurman_(Earth-101)?oldid=249621"
Community content is available under CC-BY-SA unless otherwise noted.