He tore me apart... I will return the favor.

Nebula is a boss and subsequently a playable character in Marvel Ultimate Alliance: Doom's Reckoning.

Nebula is one of Thanos's adopted daughters who has been severely enhanced with cybernetics. She was forced into the Cabal, and eventually had a confrontation with the Ultimate Alliance on Vormir, she decides to switch sides in an attempt to finally kill Thanos. 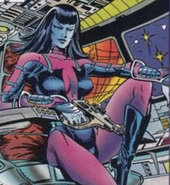 Ravager
Add a photo to this gallery
Retrieved from "https://marvelcomicsfanon.fandom.com/wiki/Nebula_(Earth-6110)?oldid=252662"
Community content is available under CC-BY-SA unless otherwise noted.