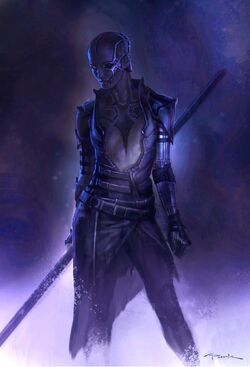 I do not trust Thanos any more than I do Peter Quill. Yet I stay. What is that expression they have on Earth? Keep your friends close, and your enemies closer.

Nebula was abducted from her home world as a child and raised to be a cybernetic assassin by the warlord Thanos. After years of abuse at his hand, Nebula breaks off from his command and becomes a bounty hunter.

Following her sister Gamora's death and the Order of the World Tree seizing control of the galaxy, Nebula has found herself join forces with the Guardians. She maintains a position on the team with the sole intention to keep an eye on Thanos, and kill him should he act out of turn.

Retrieved from "https://marvelcomicsfanon.fandom.com/wiki/Nebula_(Earth-2001)?oldid=262352"
Community content is available under CC-BY-SA unless otherwise noted.