Marvel Fanon
Register
Don't have an account?
Sign In
in: Characters, Templated Articles, No Dual Identity,
and 14 more 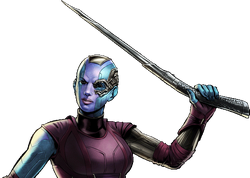 Nebula was raised by her adoptive father Thanos to become a consummate warrior and killer. She was frequently pitted against her adoptive sister Gamora in combat, but Gamora's determination to survive consistently saw Nebula suffer defeat, and with each failure Thanos would strip a piece of her away and replace it with machinery. This practice of hardening up the sisters served to foster a deep seated hatred for Thanos as well as jealousy felt towards Gamora.

Nebula eventually became a useful asset for Thanos's schemes, and she and Gamora were both tasked with recovering the Orb of Morag for him. To this end they were sent to liaise with the power hungry Kree, Ronan, who had made a deal to trade the Orb of Morag in exchange for the annihilation of Xandar. When they received word that the Orb had fallen into the possession of a thief named Peter Quill and that Quill planned on selling the Orb on Xandar, Ronan volunteered Nebula to retrieve it. However, Gamora strongly insisted that she recover the Orb, stating that she knew Xandar better than Nebula. Though Nebula protested, Ronan agreed to send Gamora in her place.

Ronan was later contacted by the Other, who informed him that Gamora had been captured by the Nova Corps and sent to the Kyln with the Orb. They arrived at the Kyln too late however, and learned that Gamora and some others had already escaped with the Orb.

Ronan was eventually contacted by Drax, who told him that the Orb was on Knowhere. Nebula joined him in his next attempt to recover the Orb, and this led her to hunt Gamora in an aerial battle. Before destroying her sister's craft, she remarked that of all her siblings, she hated her the least. Though the blast didn't incinerate Gamora, it left her and the Orb floating in space, the latter of which Nebula retrieved.

After returning to Ronan's ship the Dark Aster Ronan discovered that the Orb contained an Infinity Stone and decided to keep it and betray Thanos. Now that Ronan's newfound purpose included killing Thanos, Nebula chose to side with him, stating that if he succeeded in killing her father she would help him burn a thousand worlds.

As the Dark Aster descended on Xandar, Nebula informed Ronan that a fleet of Ravagers were en route to intercept them. Nebula then ordered all fighter squadrons to deploy and attack. But even as the Nova Corps joined the battle, Ronan dismissed them as a threat, stating that none of it would matter once he won. Nebula then went to confront Star-Lord, Gamora, Drax and Groot. As she announced her disappointment in Gamora, her diatribe was interrupted by Drax, who blasted her with a cannon. Recovering, Nebula engaged Gamora in melee combat, but was ultimately overpowered by her sister and left hanging at the edge of a hull breach. Gamora offered to save her, but Nebula severed her left wrist and fell onto a passing Ravager ship, which she commandeered and used to flee the planet.

Cyborg Body: Nebula's body has been systematically torn apart and replaced with machinery. Much of her skeletal structure includes some degree of technology supporting her musculature, and her left arm is almost entirely robotic. Nebula's voice is also rendered in a synthetic quality.