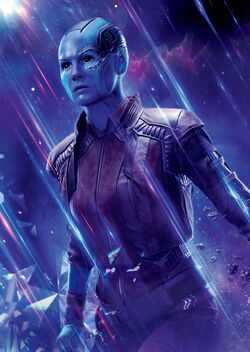 Nebula was born on the impoverished planet of Luphom II. When she was still a young child, Thanos and his armies came to Luphom II to besiege it and claim whatever resources it had to offer. Nebula's family died in the initial attacks, but she was able to avoid capture from the Chitauri, even killing a few of them before she was grabbed and taken to Thanos. He became fascinated by her spirit, and opted to bring her in as one of his daughters.

She was then raised alongside Gamora and Proxima. Nebula went on to become Thanos's least favorite, as she consistently failed to impress him in comparison to her sister. He would pit her against Gamora, and every time she lost a battle, he would replace a part of her with cybernetics out of hopes it would make her a better soldier.

Years of this torture warped Nebula's mind, causing her to blame Gamora for her situation and becoming desperate for Thanos's affection. When he went on to reform the Black Order, she was ecstatic to join and took whatever assignments she could to go out into the galaxy and wreak havoc.

When Gamora abandoned the Black Order and joined the Guardians of the Galaxy, Nebula made it her personal mission to find and kill Gamora. This would later intertwine with Thanos's mission to collect the Infinity Stones, which Nebula promised to help with. However, after multiple failed attempts to kill Gamora, the two of them found something of a common ground, which started to shake Nebula's commitment to the Black Order.

Retrieved from "https://marvelcomicsfanon.fandom.com/wiki/Nebula_(Earth-101)?oldid=250224"
Community content is available under CC-BY-SA unless otherwise noted.