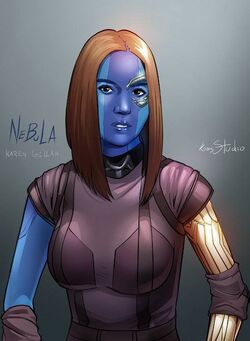 Dimension 0
Base Of Operations
Stationed on Earth's Moon
Characteristics
Gender

Welcome to Earth, home world of Thanos's beloved Empire. How may I be of service?

Nebula was abducted as a child and forced to train every day of her life until she became a perfect cybernetic assassin by her "father", Thanos.

Eventually, Nebula would betray the Black Order and form an intense hatred for Thanos. She would eventually come closer to killing him than anyone else ever had, resulting in her living out the rest of her days lobotomized.

Once Thanos had secured his empire across the galaxy, an essentially mindless Nebula was stationed on Earth's moon, where she oversaw any starships coming and going from the planet.

Retrieved from "https://marvelcomicsfanon.fandom.com/wiki/Nebula_(Dimension_0)?oldid=264164"
Community content is available under CC-BY-SA unless otherwise noted.